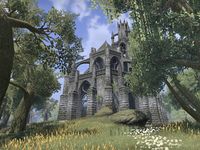 Gottlesfont Priory (or Gottlefont Priory) is a monastic settlement located off the Gold Road in the Great Forest of Cyrodiil.

The priory has strong ties to academia. Haderus of Gottlesfont was a famed author,[1] and scholar Alexandre Hetrard stayed at Gottlesfont during his visit to the nearby Ayleid ruins of Ceyatatar.[2]

Before the Alliance War of 2E 582, Gottlesfont was home to a great chapel dedicated to the Eight Divines. However, bands of looting soldiers killed the abbot and priests and stole the priory's relics, and the few remaining inhabitants were forced to close the priory temporarily.[3]

By 3E 433, the priory was only a shadow of its former self. It had a small chapel dedicated to the Nine Divines, and the Sisters of Gottlesfont were responsible for harvesting Steel Blue Entoloma and Lady's Mantle for charity.[4]