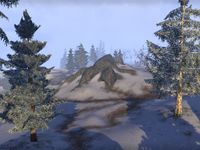 Dragonclaw Rock is a landmark found in the Jerall Mountains of Cyrodiil. It is a rock formation resembling a giant dragon's claw.

The landmark was used as a navigational tool by the invading Tsaesci army when they were headquartered at Pale Pass during the Akaviri invasion of 1E 2703.[1]

During the Alliance War of 2E 582, an expansive and strategically important fortress known as Fort Dragonclaw stood at the grounds. It had its own farm, mine and lumbermill, and was heavily fortified. It was initially located within the territory held by the Daggerfall Covenant, although the keep changed hands many times over the course of the war.[2]

Circa 3E 427, knowing of his impending death, the Dunmeri god Sotha Sil journeyed to Dragonclaw Rock to use it as a hiding place for Keening II, a replica of the ancient blade Keening which he had created to manipulate the Mechanical Heart.[3][4]

By 3E 433, nothing remained of the keep. Having come into the possession of an ancient Akaviri messenger's diary, Countess Narina Carvain of Bruma enlisted the Champion of Cyrodiil in retracing the messenger's steps to confirm her belief that she had rediscovered the location of Pale Pass. Her theory was proven correct when the Champion made use of local landmarks, including Dragonclaw Rock, to reach Pale Pass.[5]

Circa 4E 201, the Forgotten Hero used a system of portals within Clockwork City known as the Doors of Egress to track down Sotha Sil's replica tools.[3] However, when the Hero arrived at Dragonclaw Rock in search of Keening II, a dragon attacked. Although this Stoneclaw Dragon was a master of the thu'um who had been trained in ages past by Paarthurnax himself, it quickly fell, allowing the Hero to locate Sotha Sil's hiding place.[4]