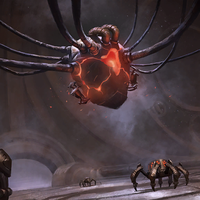 The Mechanical Heart as depicted in Legends

"The new Heart of Lorkhan will be completed. And it will power my city for all eternity.'" — Sotha Sil

The Mechanical Heart was stored and would be developed in heavy security deep within the Clockwork City's Cogitum Centralis in the Chamber of Lorkhan. The Cogitum Centralis contained an automated defense system controlled by a master factotum.[2]

In its early stages of development, the Heart proved to be dangerously unstable and Sotha Sil devised a plan to contain it as it threatened to destroy the entirety of his Clockwork City. With the creation of his own variant of Kagrenac's Tools, he was able to control the Heart, and even shape or dismantle it if necessary.[3] His plans would be rushed, as in 3E 427, the goddess Almalexia, having been driven mad by her loss of immortality, manipulated the Nerevarine to retrieve Barilzar's Mazed Band, which she used to travel to the Clockwork City to murder Sotha Sil in cold blood. Knowing that one day his friend Almalexia may come to kill him,[2] and, in his final moments, attempted to ensure that his City would live on after his death. He was successful in sealing the Heart within the Chamber of Lorkhan, where his machines would finish the construction of the Heart.[4]

The Mechanical Heart was completed in 4E 201, approximately 649 years after it was first conceived and 207 years after Sotha Sil's death. Sotha Sil's creations previously required his presence, with the city's functions going into a slumbering mode in his absence.[5] His presence was no longer needed as the heart continued to power the city and sustain its inhabitants even after his demise.[4] The Heart also allowed the realm to find new life, as the city had been overrun with vibrant flora, with vines covering the clockwork architecture and abundant plant life even piercing out of various buildings in the city's landscape,[6] possibly making the Everwound Wellspring obsolete.

It is unknown what happened to the Mechanical Heart, but Sotha Sil had made a "rounding error" in his calculations.[4] Stories tell of this error coming to play with the legend of the Forgotten Hero, who ventured into the Clockwork City and defeated the former Clockwork Apostle, Mecinar, but the stories differ from there. Some claim that the Forgotten Hero destroyed the Heart in order to cut Mecinar's divine power to fight on equal ground, and the city ceased all functions, it's inhabitants forced to abandon their home.[6] Others claim that the hero used the Heart to harness its power and fought Mecinar on equal ground, ensuring the Heart would live on, along with the city. The Heart was too much for the hero to handle and they were disintegrated, with the hero's consciousness living on within the city.[7][8][9]