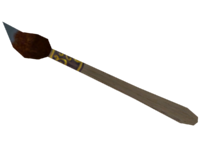 The Brush of Truepaint is an Aedric artifact supposedly created by Dibella. It is said that the bristles of the brush were woven from Dibella's own hair. The brush allows the wielder to enter a painting canvas and paint things life-sized, simply by imagining them.[1][2]

At some point before 2E 582, a Dunmer wizard named Bravam Lythandas was performing a cruel experiment in illusion on three captives he was keeping in his basement. He had magically tricked them into believing they were living in a palace, although over time the illusions began to damage their minds. As they descended into madness, one of the captives began rocking back and forth and muttering prayers to Dibella. Several days later, Bravam returned to find the basement entirely empty, with the walls, ceiling, and floor completely covered with a mural depicting the grand chamber of a palace. The only thing remaining was the Brush of Truepaint lying in the corner, which the captives had apparently used to escape into their fantasy world.[3]

Bravam's experiment journal went on to become a tome of forbidden knowledge, hoarded by Hermaeus Mora. At some point a Khajiit named Baezad-jo went looking for the Brush of Truepaint, although he was killed by a daedroth when he tried to read the journal. The journal eventually ended up on the small island of Khenarthi's Roost along with several other tomes of forbidden knowledge.[4] In 2E 582, Sybil Augustine Viliane of Wayrest received a cryptic message regarding the location of the brush and how it could be obtained.[5]

The brush was later gifted to a descendant of Bravam Lythandas, an artist and devout follower of Dibella who served in the Arnesian War of 3E 396. An errant fireball exploded next to him, and he lost the use of both arms. He was a stubborn man, and prayed to the goddess for a way to continue his trade. When the Dunmer artist died, he left the brush to his son, who went on to become the famous Rythe Lythandas of Cheydinhal. Rythe specialized in painting the Great Forest of Cyrodiil; these paintings are famous all across Tamriel for their realism, and some say that one can see the trees sway in the breeze.[2]

In 3E 433, a Bosmer or Altmer thief (reports vary) learned of the brush, the source of Rythe's fame. In an attempt to steal the artifact, the thief broke into Rythe's house, knocked him unconscious and leapt into the unfinished painting he was working on. The thief then created Painted Trolls to act as guardians, but the beasts turned on their creator and killed him. Rythe followed the thief into a painting, and became stuck there, unable to create a portal back without the brush. His wife Tivela, who was unaware of the Brush of Truepaint, put out a request to help "find" him. After several days, the Champion of Cyrodiil responded to the rumors, and entered the Painted World. The Champion met with Rythe, and fought through the Painted Trolls to the corpse of the thief. With the brush retrieved, the two were able to exit the Painted World.[1] A special edition of The Black Horse Courier titled Greatest Painter Safe! was published following the incident.[6]

The fat collected from the Painted Trolls proved to be very valuable in alchemy, and Rythe, being the only provider of this rare ingredient, began to exploit this. One known patron of his was Elgrim, an alchemist living in Riften in 4E 201.[7]