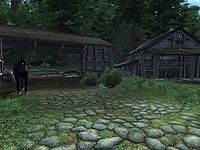 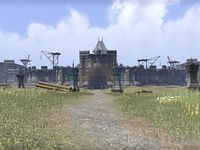 Brindle Home is a settlement located far north of Skingrad, deep in the Great Forest of Cyrodiil.

During the Three Banners War, Castle Brindle was an expansive and strategically important fortress. It had its own farm, mine and lumbermill, and was heavily fortified. It was considered to be in the Aldmeri Dominion's territory.[1]

By the late Third Era, nothing remained of the keep. Brindle Home consisted of a small village and stables. For a time, an Imperial warrior named Melus Petilius served as the town's guardian, killing off hordes of goblins when they attacked the settlement and clearing out a nest of minotaurs single-handedly. However, Petilius swore never to raise a weapon again when his wife died of a fever while he was away fighting, and he built a cabin outside of town to be closer to her grave. His piousness disgusted Molag Bal, who sent the Champion of Cyrodiil to taunt him at his wife's grave in 3E 433. Enraged, Petilius killed the Champion with a cursed mace, damning himself and allowing Bal to claim his soul. The Champion was later returned to life by the Prince to torment Petilius further.[2]