Locating the Shrine of Molag BalEdit

No one will add the shrine's marker to your map for you. However, it is possible instead to be referred to Olyn Seran, one of the worshippers at the shrine who is also the Master Trainer for Conjuration. If the Conjuration Training quest is active, a quest marker will be placed near the shrine.

The Redguard, Amir, at the shrine will tell you that you must offer Molag Bal a lion pelt (which can be obtained by slaying a mountain lion). Sometimes, lion pelts will appear in random loot sacks. At level 17 and higher, mountain lions will spawn outdoors in Farm, Plain, Rainforest, Highlands, and Mountain regions (see Outdoors Creature for a map of where these terrains can be found). They will also appear indoors in any caves or ruins occupied by animals; the closest good cave to check is Unmarked Cave. If you have not completed it already, the Fighters Guild quest A Rat Problem offers a guaranteed encounter with mountain lions, regardless of your level. Return to the shrine with the pelt and offer it to Molag Bal.

Another mortal come to do my bidding. I only wish suffering and death. You will bring me both. I want to see a man brought to the edge. And pushed. Near Brindle Home you will find Melus Petilius. A good man. An honorable man. He disgusts me. He has sworn an oath: never to raise a weapon against another man again. I want him to break that oath, and damn himself forever. You will let him kill you with this: the Cursed Mace. As you are doing this for me, I'll save your miserable life. Probably. Get out of my sight. 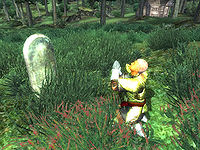 Melus Petilius at his wife's grave

Molag Bal will tell you about Melus Petilius who has forsworn violence. You are to entice him into attacking you with the Cursed Mace (which Molag gives you). Petilius lives near Brindle Home in the deep woods to the southwest. Between 10 a.m. and noon he heads to his wife's grave. While he is at the grave, drop the Cursed Mace on the ground between him and the tombstone and attack him (e.g., hit him with a weapon, hand-to-hand or cast an aggressive spell). You must attack him while he is at the grave; it is the only place where he will pick up the mace. Attack him elsewhere and he usually will not respond with aggression, and definitely will not use the mace, even if you have dropped it in front of him. If he is at the grave, he will pick up the mace and attack you. Furthermore, he rarely picks up the mace if you drop it after you attack him; thus it is advisable to place it by him before you strike.

Let Melus attack you until you die. It is advisable to save beforehand, however: there is a significant bug that may occur when he kills you. The bug notes provide tips on how to avoid triggering the bug.

At the moment you die (after a loading screen), you will reappear at Molag Bal's shrine. Activate the shrine to receive your reward: the Mace of Molag Bal which absorbs strength and magicka upon strike.

Well, it seems you've accomplished the task set out for you. Well done. Another man damned. Another ruined soul. But, you'll still get your prize, won't you? I think it was worth it... don't you? Keep up the good work, little mortal.

Should you fail, however, you will get no reward and anger the Daedric Lord.

You've failed, mortal. I didn't figure you had it in you. Weakling. Pathetic piece of filth. Leave, before I make you sorry you ever came here.