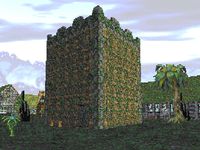 An old friend of a Fighters Guildmember is in a bind

"(Player's first name), I have an important mission that will require the utmost discretion. I can't tell you more unless you agree to help me. What do you say?"

"An old friend of mine is in grave danger, and needs an escort who is handy with a blade and can keep a secret. Naturally, I thought of you. (Friend's name) will meet you at 10:00 tonight at (residence). (He/She) will tell you more when you arrive. I would come with you, but since I am known as (his/her) friend, I might lead (his/her) enemies to (him/her). Watch your back on this one." 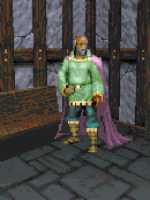 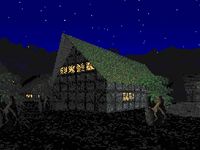 Nothing seems amiss at the moment

About 35 in-game minutes have passed after accepting the quest, your business is interrupted:

A small child of indeterminate gender hands you a note, and runs away before you have a chance to react.

The note contains the following message:

Change of plans. (Fighter Quester's name)
had to leave town quickly, and asked
me to meet you in (tavern).
Please come at once. The matter
is extremely urgent.

This tavern contact will be present from 00:00 to 22:00. In addition, the Fighter Quester will also be permanently gone. Meet the note sender in the tavern, and you will be greeted with:

"(Player's name), right? I'm glad I managed to contact you. Did (Fighter Quester's name) tell you much about what was going on? I didn't think so. Suffice it to say that the Necromancers are involved. Dangerous people to cross, indeed. But, I have an amulet for you which will warn you if agents of the Necromancers are nearby. Should come in handy. Keep a wary eye out, friend." 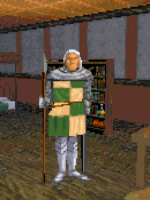 Ask around to locate the residence in question, then head inside between the hours of 22:00 and 24:00 the same day you accept the quest. If you arrive after 24:00, you will only find a dead body and no hint as to what has occurred. Without any further clues you cannot proceed with this quest, so timing is essential.

Meet the contact you are charged with protecting within. Talk to the Fighter Quester's old friend and be told:

"You are (player's name)? (Fighter Quester's name) described you well. I am (friend's name). We must proceed to Sentinel at once. I can tell you no more, except that the enemies of Queen Akorithi would give much to stop us."

The friend is now following you. Your goal is to safely travel to Sentinel, but as you exit the building:

(Friend's name) gasps, and you turn to see a feathered shaft protruding from (his/her) chest. As (he/she) sinks to (his/her) knees, (he/she) slips a letter into your hand, and murmurs, "Lord K'avar is a traitor to Sentinel. You must get this to Queen Akorithi." (Friend's name) is dead.

The letter is now in your inventory, and you can take a look at it. It reads:

I am pleased to hear of your progress
in training my forces at (stronghold dungeon).
I will send more money as soon as I can
raise it, as you will need to hire more
troops if we hope to defeat Queen Akorithi.
You are surely correct that going into open
battle against her is a lost cause, but I believe
that even for a coup de main against the
Castle itself, we will need more men.

Keep me informed of your progress. 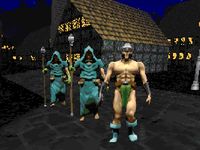 But at the moment, you have a more serious problem to attend to. Namely, the three archers and pair of mages currently attacking you. Defend yourself or flee. If you have the amulet from the tavern contact on you, then five in-game minutes after the ambush begins something odd occurs:

You are suddenly surrounded by a bright glow. Looking down, you see that the light is coming from the amulet (tavern contact's name) gave you. The ground seems to open beneath your feet, and darkness engulfs you.

Afterward, you find yourself teleported deep within a random dungeon somewhere in the region. Make your escape by finding the dungeon's exit. Once free, you have a few choices on how to proceed.

The stolen letter reveals not only Lord K'avar's current location, but also that of his stronghold; these are a local palace and a random dungeon somewhere within the current region. If you wish to confront Lord K'avar directly, he will stay at the palace for about three and a half to fourteen days, beginning the moment you accepted the quest. After that, he moves into his stronghold and must be sought there.

Your other option is to continue on to Sentinel and give the letter to Queen Akorithi. The time limit for speaking to the queen depends on the distance between the town where you were given the quest and Sentinel.

Either way, following the initial ambush you will be pursued by Lord K'avar archers until the quest is over. Your only respite from these attacks comes while within the dungeon you were teleported into by the amulet. 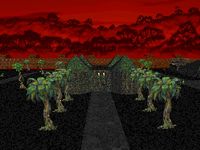 Lord K'avar lurks within the Palace 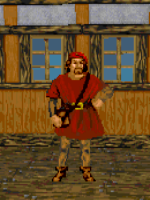 Travel to the town where Lord K'avar is staying and enter the palace. If he is present, speak to him while carrying the letter. A prompt appears asking if you want to give the letter to him.

If you deliver the letter, Lord K'avar will be pleased and say:

"I seem to have misjudged you, (player's name). Perhaps we can be friends after all. Here, take this diamond for your troubles."

This ends the quest for now (see below). However, if you refuse to give him the letter, he flees:

Lord K'avar looks at you intently. The color drains from his face as he realizes who you are, and before anyone can stop him he turns and bolts for the door.

Lord K'avar flees to his stronghold dungeon; in order to proceed, you must seek out Queen Akorithi.

If you simply arrive too late to meet Lord K'avar at the palace but you still wish to give him the letter, you must seek him out in his stronghold. This results in a standard dungeon crawl.

Travel to Castle Sentinel, talk to Queen Akorithi, and say "yes" when prompted to deliver the letter. If Lord K'avar is still at the palace, the queen will read the letter and say:

"There can be no doubt. This is his personal seal and signature. Guards! Go to the Great Hall and seize Lord K'avar at once, and throw him in the dungeon."

You will gain reputation with Queen Akorithi and Sentinel and a random amount of gold.

If Lord K'avar has already fled to his stronghold when you give the letter to Akorithi, she will offer you the task to capture him:

"Yes? What's this letter? Dear (random god), Lord K'avar is plotting against me?! Guards! Search the Castle for Lord K'avar and bring him to me at once."
Several guards run from the room. A few minutes later one returns. With a salute, he reports that Lord K'avar is nowhere to be found.
Queen Akroithi turns to you: "He must have been alerted that his treason was about to be uncovered. Most likely he has retired to this (stronghold dungeon) he refers to in his letter. Under the circumstances, I would prefer to avoid a direct attack. You are familiar with the area, yes? Would you perform one more service for me and bring this traitor to justice?"

"Very well. I will deal with him myself."

Akorithi gives you some gold and the quest ends, for now (see below).

The queen is pleased with your decision:

"(Player's name), you are proving most loyal to the throne of Sentinel. I will wait (time limit) days before assaulting Lord K'avar's fortress. I hereby proclaim Lord K'avar outlaw -- capture him if you can, but kill him if you must." 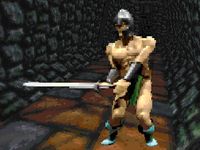 If you agree to capture Lord K'avar, travel to his stronghold in the region where you started this quest. The time limit depends on the distance from Sentinel to the stronghold. Enter the stronghold and find Lord K'avar within; he will appear as a Ranger class enemy. When you hit him for the first time, he shouts:

"Surrender and be dragged through the streets of Sentinel as a public spectacle? Never!"

If he dies, you receive the simple notification "Lord K'avar is dead." If you fail to kill him within five in-game minutes, he will escape with the following message:

Lord K'avar throws down his weapon. Thinking he is surrendering, you pause in your attack, but instead he twists a ring on his finger. As Lord K'avar disappears in a haze of light, you faintly hear him shout, "Tell that bitch that she hasn't seen the last of me!"

Return to Queen Akorithi after Lord K'avar is dead or on the run.

If Lord K'avar escaped Castle Sentinel, but you decline Queen Akorithi's request to pursue him, she says:

"You alerted me to a grave threat to the realm. Please accept my sincere thanks as well as this (random gold) gold."

When you return to Queen Akorithi after killing Lord K'avar, she says:

"So be it. Lord K'avar chose his course, and paid the consequences, thanks to you. Here is an enchanted (magical item) for your service to Sentinel."

When you return to Queen Akorithi after Lord K'avar has escaped, she says:

"(Oath)! Lord K'avar is a slippery one, indeed. Well, I will track him down eventually, never fear. Sentinel's justice will pursue him wherever he may hide. His associates have all been arrested or fled the realm, so Lord K'avar no longer poses any threat, at least. (Player's name), please accept this enchanted (magical item) for your service to Sentinel."

If you successfully deliver the letter to Lord K'avar, you will be contacted by one of his men in 31 to 93 days for another quest.

If you deliver the letter to the queen while Lord K'avar is still at the palace, decline the queen's request to capture him, or if he escapes during the battle, you will be contacted by Akorithi in 31 to 93 days for another quest.

If you give the letter to Lord K'avar you will gain reputation as shown below:

If you give the letter to Queen Akorithi you will gain reputation as shown below: