"Howdy, (player's first name). If you got a few days free, a job just came in for some giant-killin', and I thought of you. Interested?"

"Right. Seems there's this giant, moved into (dungeon) a while back and has been having a fine old time feastin' on (noble's name)'s sheep in the area. Ate a few of the local villagers too, I guess, but old (noble's name) don't seem so concerned about that. At any rate, (he/she) wants this giant taken care of within (time limit) days, and (he/she)'s payin' (random gold) gold for it. See ya in a bit."

"Too busy, eh? When I was your age, I was never too busy to off a giant or two. Kids these days, I tell ya." 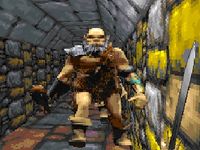 The giants are relentless, and hungry 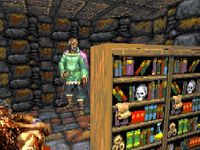 This villager managed to avoid being eaten

Travel to the dungeon the Fighter Quester mentioned and find the giant within. When you hit the giant the first time, you receive a message:

The giant roars in pain. You hear the sound of heavy footsteps coming towards you. Perhaps the giant invited a few friends over for dinner...

Six more giants will show up one after another, in rapid succession. However, it is only necessary to kill the first to complete the quest successfully. Additionally, there is a 1/3 chance that a villager will be found near the quest target giant. Talk to the villager and they will say:

"Thank (random god) you're here! I was on my way to market yesterday when the giant carried me off along with four other merchants I was traveling with. It already ate them, I guess it was saving me for later. Will you please help me get out of this place? I'll never make it out on my own."

If you decide to help, the villager will go on:

"You're a true hero. Let me introduce myself: (villager's name) of (villager's hometown). I was on my way to (general store) in (destination town). If you could drop me off there, I would be forever in your debt."

Escort the villager to the general store in the city they named. If you succeed in entering the store within the time limit, the villager will thank you, saying:

"I've enjoyed your company, (player's first name). You saved my life, and I won't forget it."

"You are truly heartless."

If you agree to help, but fail to get the villager to the shop in time, you are told:

"I appreciate your help, but I think I can find my own way from here."

Regardless of which decision you make, return to the Fighter Quester once the target giant is dead to collect your reward.

When you return to the Fighter Quester after the giant is dead, he will say:

"Hail the giant-killer! I knew you was the right one for the job. Here's the (random gold) gold."

There is a 1/3 chance he will also give you a dungeon map, saying:

"Hey, here's a map to (random dungeon) one of the other chaps found the other day. If I was a couple years younger, we could tear through it together, just like the old days."

If you escort the villager to the store in time, you will gain reputation as seen below:

If you don't agree to escort the villager to the store, you will lose reputation as seen below: