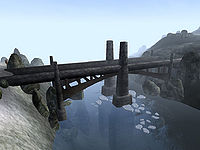 Bridge across the Isild river between two regions: Felsaad Coast and Moesring Mountains

The Moesring Mountains region covers the frozen wastelands in northwestern tip of Solstheim. The northern and western borders are the white coasts of the Inner Sea while to the south are the Isinfier Plains. To the east is the Isild river and beyond that is the northern sector of the Felsaad Coast. Apart from attempting the treacherous climb on the sides of the mountain range, the only passes across the mountain range (from mainland Solstheim) are at Thormoor's watch, at the southern end of the Moesring Mountains; Hrothmund's Pass, close to the rock formation of Hrothmund's Bane to the west as well as the Wind Stone to the east and finally, the Northern Pass east of Castle Karstaag, on the northern slopes of the Moesring Mountains.

Hvitkald Peak, the highest mountain on Solstheim, is situated at the southern end of the Moesring Mountains. It is here, and only here, where the Wolfsbane flower naturally grows. On the southern side of the mountain is the Water Stone, a relic held sacred by the Skaal for its importance to The Skaal Test of Loyalty and therefore Solstheim itself. One of the other stones, the Wind Stone, is located on the shores of the Harstrad River, at the eastern side of Hrothmund's Pass. 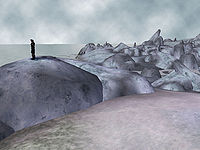 Thormoor's Watch is the white and hilly area on the feet of Hvitkald Peak and the mountains at the southern end of the range. At the very most northwestern tip of Solstheim, is the Mortrag Glacier. East of this is Castle Karstaag, the ancient dwelling of the frost giant Karstaag. The castle (under a different name) may have been a stronghold of the long gone race of Falmer, or Snow Elves. South of the castle is the rock formation of Hrothmund's Bane, the final resting place of one of Thirsk's, if not Solstheim's, greatest heroes.

However, it is not the wonder of the halls of Castle Karstaag or the sheer size of Hvitkald Peak that makes the Moesring Mountains region famous and revered by the inhabitants of Solstheim. The white plains of the region were the site of the final and epic battle of Falmer and Nords. The battle is partly described by Lokheim in his book, The Fall of the Snow Prince. The start of the battle saw the Nords gain the upper hand over the Falmer possibly due to sheer numbers (Nords produce children faster due to elves only producing children slowly unless there is a significant decrease in population) and the Falmer were obviously dismayed at fighting a losing battle. It was then, when all hope seemed lost, that the Snow Prince, entered the battle riding a white steed. His appearance sent fear and wonder into the hearts of the Nords and gave renewed hope and courage among his kinsmen. Riding into battle with the Falmer army behind him, the Snow Prince crushed his enemies. How many he killed is not known, but to come so close to turning the tide of such a battle, the Snow Prince would have needed to have killed hundreds, possibly thousands. Lokheim describes how, with victory within his grasp, the Snow Prince was killed by the most unlikely of foes: a girl of only twelve years, driven mad by rage and sorrow of the death of her only parent, killed the Snow Prince. With the death of their leader, the Falmer fled from the battle. The battle saw countless numbers of Falmer and Nords lying dead on the battlefield, now red with their blood. It is revealed, contrary to Nordic myth, that the Rieklings are not the ancient and proud race of the Falmer but are different entirely. The Falmer themselves are believed to have left Solstheim and became mixed with the other races of the elves, thus vanishing as an independent race from Tamriel. More is told of this in the In Search of the Falmer quest. 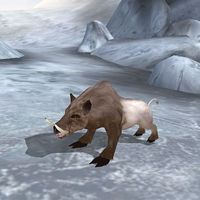 A Tusked Bristleback on an ice field

The Moesring Mountains are home only to species of hardy nature: Tusked Bristleback, Rieklings, Horkers, Common wolves and Snow Wolves; almost nothing else survives in the freezing white north of Solstheim apart from the animated spirits of the dead (which are dead anyway) like skeletons. Although few and far between, there are some humans that live (or operate) in the region like smugglers or mercenaries (The Patchwork Airship quest).

Travel in and around the cold wastes of the region is restricted to foot. Travel by foot is further restricted to the plains and occasional gentle slopes on some mountains. Potions or amulets of levitation are highly recommended when undertaking a journey anywhere in the region. Blizzards and even minor snowstorms will seriously decrease visibility, especially at night, so setting out in the early hours of the morning is recommended.