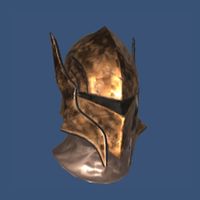 The Bronzed Gladiator's Helm is a unique helmet awarded to players who ranked between position 1,000 and position 501 on the Arena Leaderboards prior to their reset at the end of early access. It requires Dragon ScalesDragon Scales

Those who ranked between positions 500 and 101 instead received the Silver Hero's Helm, while those in the top 100 received the Golden Champion's Helm.