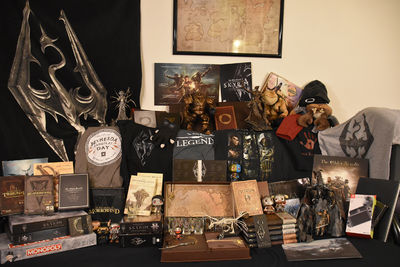 My Elder Scrolls collection as of 5/2018

Hello! I'm a 27-year-old programmer who discovered the Elder Scrolls series in June 2012. It was completely on a whim, really; it was 50% off at the store on the day I bought my college laptop, and all I knew was that Skyrim was some sort of fantasy RPG and that it was "really good". I never would have guessed what I was getting into.

So, as far as my journey to UESP, after Googling for help on quests, I found UESP in many of my searches, and eventually determined that it was the best wiki. I discovered the UESP forum in October 2012, started really contributing to the wiki more once Dragonborn came out, joined the forum moderating team in May 2013, and became an autopatrolled user in anticipation of ESO's release in 2014. I also gained access to the UESP Facebook page in August 2014 and currently co-run it, have access to the Twitter and Youtube and post occasionally, and am also an admin on the UESP blog and write for it from time to time.

I'm still working my way through the ES series. I also am a collector of ES merch, as you can see by the picture on this page.