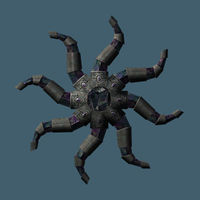 The Black Star is an altered Daedric Artifact awarded to you by Nelacar for cleansing the soul of Malyn Varen from the star as part of the quest The Black Star. It is the alternative award to the original version of the artifact Azura's Star. The main benefit of acquiring The Black Star is the bonus that it offers to enchanters; the star is essentially a reusable black soul gem. Enchanting objects with The Black Star merely uses up the soul that it was carrying, but the star will be able to be reused to store another soul like a regular soul gem. The Black Star also has one clear advantage over Azura's Star: it can capture both black and white souls, unlike Azura's Star, which can only capture white souls.

For more information, see the lore article on this artifact.