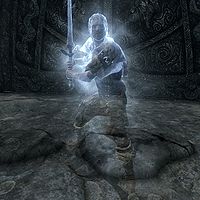 A Subjugated Ghost with his sword drawn

Subjugated Ghosts are Nord bandits, and are the ghostly appearances outside of Rannveig's Fast. They are accompanied by a Ghost Adventurer and are forced to attack you against their will.

They all wear a set of randomly determined light armor which includes a pair of boots and a 50% chance of a pair of gauntlets. Their outfit may not be a matching set, as it can be a mixture of fur, hide, studded, leather or scaled versions, depending on your level.

Like the Ghost Adventurer forced to protect the Rannveig's Fast entrance, he will apologize for his attacks:

This Skyrim-related article is a stub. You can help by expanding it.
Retrieved from "https://en.uesp.net/w/index.php?title=Skyrim:Subjugated_Ghost&oldid=1838978"
Last edited on 3 September 2018, at 23:46