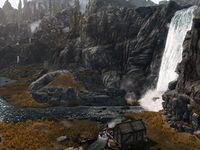 River Hjaal before flowing into the marshes.

The River Hjaal is the main river that flows through the center of Hjaalmarch.

This river's headwaters are located in the highlands south of Morthal, along the border between Hjaalmarch and Whiterun Hold. After dropping down a series of waterfalls, the river passes through Morthal, then spreads out into a wide marshy region that eventually drains into the Karth River, which flows into the Sea of Ghosts.

The river is inhabited by many species of fish, such as Abecean Longfin, Cyrodilic Spadetail, Histcarp, River Betty, Silverside Perch, and Salmon.