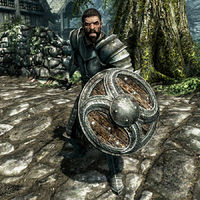 Hired Thugs are groups of three NPCs who may appear after you steal an item or kill another NPC (whether or not you get caught). They approach with weapons sheathed, declare their intention to teach you a lesson, then initiate combat; there is no way to yield to them.

They always carry a contract. If they intend to avenge a theft, the contract will identify the victim; if the crime is murder, it will come from a relative of the victim.