A promotional image for the High-Resolution Texture Pack

The High Resolution Texture Pack is an official add-on for Skyrim that replaces many textures throughout the game with versions of a higher resolution. It was made available on February 7, 2012 alongside the Creation Kit and Fall of the Space Core, Vol 1 and is the first downloadable content for the game. The latest update of this pack not only adds support for the latest add-on Dragonborn but also enhances support for two already existing add-ons, Dawnguard and Hearthfire.

The texture pack has not officially been made available for the Special Edition as it is obsolete.

Experience The Elder Scrolls V: Skyrim as you've never seen it before with the Skyrim High-Resolution Texture Pack. Make sure your system requirements exceed Skyrim's recommended specs before attempting to install, including Windows Vista or 7 operating system, a minimum of 4GB of system RAM and a DirectX 9.0c compatible NVIDIA or AMD ATI video card with at least 1 GB of RAM and the latest drivers.—Steam Description Page 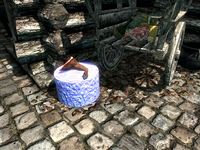 An example of missing textures
Retrieved from "https://en.uesp.net/w/index.php?title=Skyrim:High_Resolution_Texture_Pack&oldid=2288251"