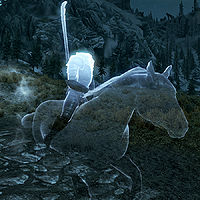 The Headless Horseman is a headless ghost riding a spectral horse who roams around Skyrim at night. If you follow him, he will lead you to Hamvir's Rest, making various stops along the way. He can easily be followed on horseback, and will sometimes interact with you and his surroundings. He is difficult to keep up with if you are not mounted, but it is possible: sprint whenever you can, and if you have access to the Whirlwind Sprint shout, you can use it to easily catch up to him.

The Headless Horseman wears a full set of unique armor that is identical to steel plate armor (with the added effect of making his head invisible), and carries a leveled battleaxe on his back.

When following the Headless Horseman through his nightly travels, if any NPC kills a nearby enemy (such as a wolf, spider, or bandit), you can hear the Horseman whispering in response—commonly the phrase: "Finality." Other times, he will begin speaking in full sentences, but this is generally when you are too far away to hear the conversation clearly. One such phrase, "Such an abrupt end to our game.", is often heard if the Headless Horseman fails to reach his final destination before sunrise.

His horse has a RefID of 0010BF90, and is simply named 'Horse'. It is ethereal (weapons/attacks pass through it) and leaves a smoky blue trail behind it. It can be ridden like a normal horse but cannot be interacted with in any other way. If you are attacked while not mounted on the horse, it will attack the aggressor as other horses do when not being ridden. It does damage like a normal horse, but cannot be hurt, and has infinite stamina. The horse will also behave like a wild horse, meaning you can make it fast travel with you, but it will start heading back to where it spawned once you dismount. The horse reacts with the normal horse sound effect when it would normally take fall damage, but does not actually take any damage.

This Skyrim-related article is a stub. You can help by expanding it.
Retrieved from "https://en.m.uesp.net/w/index.php?title=Skyrim:Headless_Horseman&oldid=2071098"
Categories:
Hidden categories: