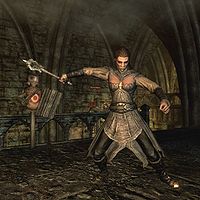 Fura Bloodmouth is a Nord warrior and vampire in Volkihar Keep. She is a master trainer of Two-handed.

Fura wears a set of light gray colored vampire armor with a matching pair of boots. She is equipped with a leveled one-handed weapon which can be up to elven quality. She carries random leveled bandit loot, and has a 25% chance of carrying 1-9 gold.

After becoming a vampire if she is spoken to she will say:

"New blood, eh? Let's get something very clear. I don't care about politics. You want to fight over the throne with the rest of them, go right ahead. I feed when I'm hungry, I sleep when I'm tired, and I kill whenever I'm in the mood. Those are the things that are important to me."

What can I do to help?
"The Dawnguard will want the Bow, and they will fight us, hard, to get it. We should strike them first before they can muster a larger force. But their time has come to an end. And you will be the one that ends it."
Understood.
"Good. They've holed up in an abandoned fort in the Reach [sic]. Kill their leaders. That should put a stop to a full out war."

I've killed the Dawnguard leaders.
"Good. That should slow them down. But, we haven't gotten rid of them completely. A body can rattle around confused long after it's head's been severed."

What can I do to help?
"A bunch of feral vampires are running wild, upsetting the mortals. When the prey is riled, it makes things difficult for us. Go cull the brutish beasts before the problem gets out of hand."
OR
"A cadre of lesser beasts has become a nuisance, taking too bold an approach to their feeding. The herd is becoming distressed, which makes it more difficult for us to slip in and out undetected. It is time to cull the weak."

Upon return, when you tell Fura that the thin-blooded vampires are dead:

The <Vampire> at <Dungeon> has been dealt with.
"Good job. At first you may pity the thin-bloods. But after disposing of a few, you realize they aren't worth the worry."
OR
"You have done well. It may seem cruel that we hold our thin-blooded kin in low esteem. But our needs must come before theirs."

The first time you do this quest:

What can I do to help?
"A feral-blooded has holed up with a group of bandits. Likely wants to create a nest of broodlings."

"A feral-blooded has holed up with a group of necromancers. Likely wants to create a nest of broodlings."

"We don't need competition for blood, and we don't want the mortals getting up in arms making things difficult for us. Go destroy the feral beast before this becomes a problem."

I have killed the <Vampire> at <Dungeon>.
"Good work. It's always best to deal with a problem by ripping it out at the root."

Subsequent times she will instead say:

What can I do to help?
"One of the feral brood has joined a group of bandits, presumably with aims to grant the gift to the entire lot of them."

"One of the feral brood has joined a group of nercromancers, presumably with aims to grant the gift to the entire lot of them."

"Needless to say, we can't abide that, as it would raise general alarm amongst the herd, to say nothing of the increased feeding competition. You are to destroy the feral creature before this small problem becomes a larger one."

I have killed the <Vampire> at <Dungeon>.
"Good. I prefer to nip budding problems before they reach full bloom. I trust it wasn't too much of an effort on your part."

What can I do to help?
"You're going to go kill a Dawnguard spy. But don't draw attention. Some kills are for fun, some for profit. And others are for sending messages. This one is a message. With any luck he'll bleed to death before anyone notices. A cold corpse will say what we want better than a warm one."
What do you mean by "discreet."
"What do you think I mean? Don't make a big scene. Don't get caught. The corpse is to be the message, not the attack."

If you ask her the same question again:

Upon returning if the kill was discreet, Fura will say:

"Well done. Nothing like a good kill to get the blood pumping, is there?"

If you were not discreet, she will instead say:

"Apparently you had blood in your ears when I said not to draw attention to yourself. If I wanted a messy kill I would have said so. But a kill is a kill, and it'll send a message to the Dawnguard, if not exactly the one we wanted."

She may greet you by saying:

"I don't converse with my meals." (If you are not a vampire)
"I wish Orthjolf and Vingalmo would just get it over with and kill each other. I'm tired of listening to them."
"None can deny your power now."
"Why worry about who has the bigger chair at the table when there's more than enough to go around?"

If you approach her in Vampire Lord form:

"Parading around in that form won't do you any good here."

If you have been cured of vampirism before Kindred Judgment:

"It's disrespectful and dangerous to walk around here mortal. What were you thinking? You'd best beg Lord Harkon to turn you at once. Although you do smell delicious…"

If you have been cured of vampirism after Kindred Judgement:

"If you're not one of us, you're just another piece of meat. Talk to Serana, and decide which you want to be."

When spoken to she can be asked questions:

I need training for Two-Handed weapons.

Who are the Dawnguard?
"A more "serious" group of the Vigilants of Stendarr. Sometimes when you skin a skeever, you find he has a more aggressive mate. The Dawnguard apparently like killing vampires. Almost as much as we like killing them."

How do you serve Lord Harkon?
"Simple. He says 'kill', I kill. Sometimes he doesn't even have to say it."

In combat, Fura may use taunts such as:

"I'm going to rend you limb from limb!"
"Every last drop of your blood is mine!"
"You've no chance against a true vampire!"