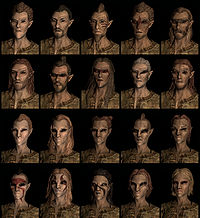 A compilation of the preset Bosmer faces available in Skyrim

Illustration of a typical Bosmer male

The Bosmer are the Elven clan-folk of Valenwood, a forested province in southwestern Tamriel. In the Empire, they are often referred to as Wood Elves, but Bosmer, Boiche, or the Tree-Sap people is what they call themselves. Bosmer rejected the stiff, formal traditions of Aldmeri high culture, preferring a more romantic, simple existence in harmony with the land and its wild beauty and creatures. They are relatively nimble and quick in body compared to their more "civilized" Altmeri cousins (who often look down upon the Bosmer as unruly and naive). Their agility makes them well-suited as scouts and thieves. However, they are also a quick-witted folk, and many pursue successful careers in scholarly pursuits or trading. Bosmer live two to three times as long as humans; with a 200-year-old Bosmer being old and a 300-year-old Bosmer being very, very old. Though they are considered less influential than some of their Elven brethren, the Bosmer are also relatively prone to producing offspring. As a result, they outnumber all other mer on Tamriel.

The best archers in all of Tamriel, the Bosmer snatch and fire arrows in one continuous motion; they are even rumored to have invented the bow. They have many natural and unique abilities; notably, they can command simple-minded creatures and have a nearly chameleon-like ability to hide in forested areas. Many in the forests of Valenwood follow the tenets of the Green Pact. These "Green Pact Bosmer" are religiously carnivorous and cannibalistic, and do not harm the vegetation of Valenwood, though they are not averse to using wooden or plant-derived products created by others.

The clanfolk of the Western Valenwood forests, also known as "Bosmer." Wood elves make good scouts and thieves, and there are no finer archers in all of Tamriel. They have natural resistances to both poisons and diseases. They can Command Animals to fight for them.

The nimble Bosmer are strongly suited for thief characters and archers. Their talent for alchemy allows them to make poisons to help their archery even more and to create potions that could help their thievery.

In combat, Bosmer are heavily focused on archery, in which they are generally understood to be the single best among the Tamriel races. They start out with a nice bonus in Archery and are well-suited to use it. They are good in sneaking, so they can often get a sneak attack bonus.

Particularly in the early levels, the animal ally ability can be somewhat useful. Low combat skills can render some creatures (particularly bears) extremely dangerous to low level characters, especially melee focused players. This ability also overrides a Spriggan's ability to control animals, which can potentially turn a fight in the player's favor. Additionally, having an animal to distract dragons early on can be particularly helpful. It's worth noting, however, that the situational nature of this attribute coupled with its redundancy anywhere beyond the mid levels makes it one of the weaker bonuses available.

In combat, Bosmer may be taunted with "Should have stayed in your precious forests, Elf!"