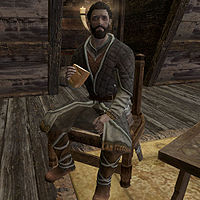 Captain Lonely-Gale is a Nord warrior living in Windhelm. He becomes Brunwulf Free-Winter's steward after Ulfric is deposed. He is intent on letting you know that he was a sailor: "The townsfolk call me "captain" because I used to be a sailor." He is also frequently pestered and pined after by Viola Giordano, which is evident when he sometimes greets you by saying: "Did Viola send you to bother me?"

His outfit consists of fine clothes and a pair of fine boots. He is also equipped with a steel sword and carries around a selection of rich class loot and gold.

He enjoys a rather relaxed life in Windhelm, although he never sleeps, spending most of his time in Candlehearth Hall, although he leaves to browse the market stalls for 4 hours at 8am, followed immediately by 6 hours wandering the city.

If you ask him what sort of captain he is, he will go on to explain: "Well, nothing. At least not any more. Folk just call me that because of what I used to do. I was a sailor for many a year. I made my coin as a trader and in time, I bought my own ship. When I retired here in Windhelm, most folk already knew me as Captain Lonely-Gale, and the name just stuck." Asking what there is to do around the city, he will suggest: "If you're looking to pass the time, you can give Calixto a few septims and gawk at whater [sic] oddity he's come across lately. If you're need of goods, there's a market. If it's a soft bed and a hot meal you're after, there's Candlehearth Hall." Also asking who the prominent citizens are, he will inform you: "There's an author named Adonato staying at the inn. He's published a few works of historical fiction. The clans Shatter-Shield and Cruel-Sea see most of the gold that passes through the city. And obviously you have Ulfric, the Jarl and future High King. Oh, and that busybody Viola Giordano. She's got her nose in everyone's business, which I guess is one way of being prominent." Also during the quest Blood on the Ice, if you tell him that some locals are talking about murders, he will comment: "Terrible shame, that. Seems we have a killer on the loose here in Windhelm. He's claimed three victims that I know of, though maybe there's more that haven't been found yet. All lovely young ladies [sic], too. Let's hope the guards find that demon soon, and introduce him to the headsman's axe."

This conversation with Ambarys Rendar appears to have been intended to occur when the player first entered Windhelm, much like the conversation between Brunwulf and Malthyr Elenil in the Gray Quarter.

As guard captain, Lonely-Gale would have also met with Jarl Ulfric to discuss the problems posed by Viola Giordano's snooping and the Dunmers' hostility to the Stormcloaks.

Ulfric: "Captain, I've been receiving complaints about this Giordano woman.
Captain Lonely-Gale: "Yes, sir. I've been trying to quiet her, but she's insistent. She thinks she can find out who's been killing the women..."
Ulfric: "I don't care if she can find a living dwarf -- I can't have her stirring up trouble. We have enough problems as it is."
Captain Lonely-Gale: "Yes, sir. I'll try to contain her."
Ulfric: "See that you do. I will not let Windhelm descend into chaos over a few overactive imaginations."