Like the dungeons in Cyrodiil and Oblivion, the Shivering Isles are littered with traps. Although a few traps are familiar from the vanilla game (see notes), the dangers found in dungeons on the Isles are generally unique in appearance or function.

Most traps are tripped if you activate a certain "trigger," which may be a physical object or an invisible proximity trigger. Traps are usually hidden in dark areas or are blended into their environment, making them harder to avoid. After an activated trap resets, there is usually a small time period where it is safe to pass. They are returned to their original state altogether during a cell reset. (When you have not visited a particular cell for 72 in-game hours, everything in it respawns.) 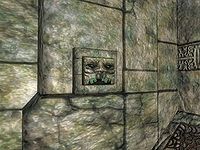 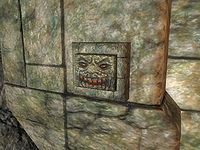 Buttons will often only open a gate, but can sometimes trigger a trap instead. If the button next to a gate triggers a trap, you will have to look elsewhere for a mechanism to open the gate. Always be careful when pushing a button and look around first to see if there are signs of traps or other buttons.

Physical traps usually damage their victims and push them backwards. The damage cannot be avoided by magical means; the only way to reduce damage from these traps is the Resist Normal Weapons effect. The damage dealt by physical traps is leveled, and is calculated for each actor individually by using its own level. The amount of damage dealt is not affected by the difficulty slider. As with trigger traps, physical traps can be used to a player's advantage to kill groups of enemies. 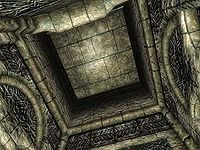 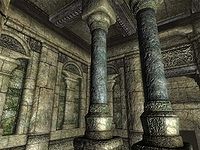 Although it is impossible to actually recognize a column or ceiling that is about to cave in, there is a pattern in their placement. For example, when you see several columns in a row, there is a good chance that one will crumble (but usually not more than one per row). Some ruins may have no cave in traps at all, while some others are full with them. If you encounter one cave in, there is a good chance there are more in the area. Xeddefen is notable as the ruin with the most cave in traps.

The area targeted by the spikes is a narrow area perpendicular to the tunnel. Either avoid the trigger to avoid the trap, or move quickly over it. 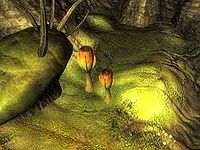 This trap will not physically move you, and can actually swiftly kill actors who wander into this trap by repeatedly damaging them. 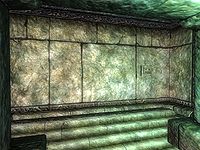 Some walls may not reveal an enemy, but instead hide treasure or even passages to other areas. 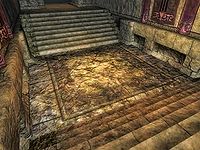 Sometimes spikes may be found under the trapped floor. In Ebrocca, some floors open and close after set time intervals. Some remote areas can only be reached by purposely falling through one of these traps.

Magical traps fire spells at their victims. Depending on the spell cast, the effect can be absorbed, reflected, or resisted through magical means. Unlike physical traps, magical traps always aim directly at you, rather than at a fixed location. Magical traps will always "see" you, regardless of any Chameleon or Invisibility effects you may have. 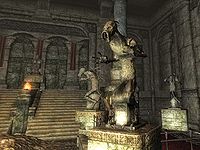 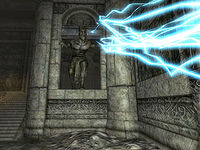 There are two main varieties of this trap: a normal version and a weaker version (with a reduced Damage Health effect). The weaker version is usually found in groups, and their combined effect is actually more dangerous than the standalone version. Effects for the weaker version of this trap are indicated by the levels shown in parentheses on the table.

A third, much less common variety employs an area Shock Damage spell with slightly lower stats than the standard Damage Health effect. This variety is found in only three places: two fallen hunger statues in Xeddefen, Felles and Xeddefen, Fales and a Sheogorath statue in Ebrocca, Masse. 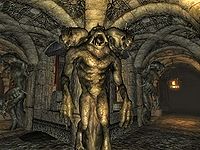 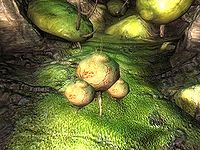 If you set off the trap by firing an arrow or spell at it, the trap may be used to hurt other actors. After the trap has been set off, it takes 15 seconds to recharge.

The spell effects can be absorbed and resisted, but not reflected.