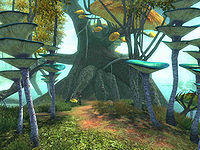 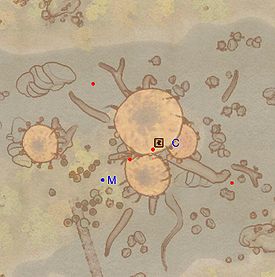 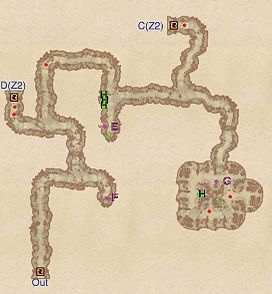 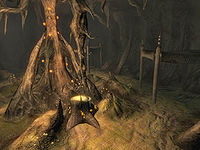 The amber stump and the nearby encampment

This zone is fairly linear and navigating shouldn't pose any serious problems. Simply move through the root tunnels in a clockwise fashion until you arrive at a large room containing a small encampment and an amber stump (H) guarded by two Grummites and a spore pod trap (G). Along the way, make sure to loot the three amber stumps and limbs at H and to access the hollowed stump protected by three root spikes traps (E). You then have to choice to access the next zone, Fetid Grove, Encampment, through door D or C. The former is found near the entrance, on the left, and leads to lower level of the next zone. The latter is to the north of the encampment and is the best choice. 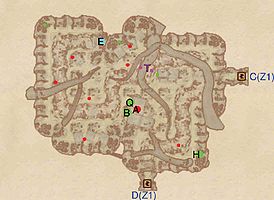 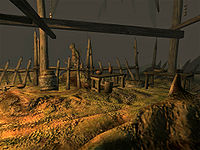 If you chose the easy route in Fetid Grove, you will arrive in the Encampment through door D and will be up for quite a challenge, as you will have to navigate through a long underground tunnel and avoid the unfriendly fire from several Grummite Archers. You will also have to fight the Grummites patrolling the path and jump over two root spike traps at T. If you chose the longer trek in the previous zone, you will arrive from door C and find yourself on the upper level, with a much clearer view of the opposition.

In both cases, your main objective in this large room is Pyke's Medallion in the chest at Q and the boss-leveled Urn at B, guarded by a boss-leveled Grummite at A. Try to use sneak to take out some of the enemies, in order to avoid having to fight with more than three at once. Make sure to loot the amber stump in the southeast corner (H) and check out the rather peculiar grummite at E; imprisoned and slain by his own.