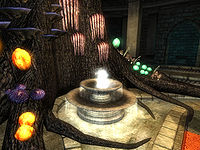 The Font of Madness

The Font of Madness is a magical fountain from which the madness of the whole Isles stems. It is found behind Sheogorath's throne and is used to imbue the Staff of Sheogorath with power, after which it can be used to recharge it.

The font is inextricably linked with the Realm of Madness, as the Isles' wisest sages will tell you. Dyus claims that "The trees and branches of this Realm feed from a deep font of madness and mystery", while Haskill states that "Once the source of Madness becomes the Font of Order, Jyggalag has won. As goes the Font of Madness, so goes the Realm" and "The Font flows with the sap of the Tree of Madness, which it draws up from deep beneath the palace. The Fountainhead leads down to the Pools of Dementia and Mania, where the insanity of the Realm's inhabitants settles."

During the quest The Roots of Madness, the font will be taken over by Order, and small obelisks will spawn around it. Once you cleanse the pools of Mania and Dementia in The Fountainhead the font will return to its former glory.