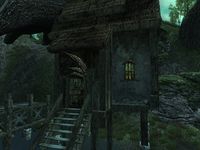 Cindanwe's House is a house on the eastern end of Fellmoor. 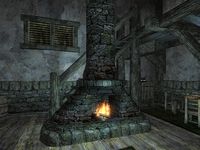 Cindanwe's house contains a large number of ingredients. Each of the five barrels around the house holds four samples of black tar, four water root pod pits, four samples of tobacco, and four tomatoes, as does the cupboard in the east corner with six bottles of mead on top of it. The two crates under the stairs contain dishes. Three more samples of black tar sit on a table on the northwest wall, along with grummite eggs and another bottle of mead. Six more tomatoes sit on the dining table along with two smoked baliwog legs and a loaf of bread. Another two tomatoes are held in a basket nearby. Three baskets in the loft bedroom hold nine more pod pits. The chest of drawers between them contains only a cloth bolt, an inkwell, and a quill, as does the one downstairs. None of the containers respawn.