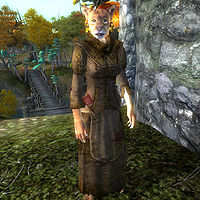 Atrabhi (Dementia) is a split personality of the original Atrabhi who lives in the village of Split. She is a compulsive liar, as she will directly contradict anything that other inhabitants of the Isles will tell you. Her Mania counterpart also lives in town.

She seems to have little to do in life and occupies most of her day by wandering around Split and distracting her counterpart from her reading. She sleeps in J'zidzo's house from 11pm to 9am and then spends the next hour wandering around the house. At 10am she exits the house and spends the rest of the day strolling around town, taking breaks at 11am and at 5pm for a two-hour lunch and dinner out in the open. At 8pm, she heads back inside and paces around the house until her bedtime.

She wears common, lower-class Dementia clothing: a patchwork shirt and pants and a pair of scruffy shoes. She possesses up to two random common books (50%), one random cheap book (50%) and one random rare book (50%). Because she never reads any of them, it is likely she stole them from her book-worm counterpart to annoy her. She also carries the key to J'zidzo's house and a leveled amount of gold. She is a peaceful soul and doesn't wield any weapons or cast any spells, relying solely on her fist if things get bad.

Atrabhi will always tell you and the other citizens the exact opposite of what is really going on and will more or less lie about everything; when you arrive in Split, she may look at you and claim: "Sure, friend. Go right ahead. I have plenty of time to talk to you. Really, I do." When you talk to her, she will give you her own take on the Manic side of Split, in particular her own double: "I've never seen my own double. And I certainly don't want to talk about it." Asking her about Doubles will net you even more confusing information: "I love the other Atrabhi! And I certainly wouldn't be happy if you killed her. Really. I wouldn't be happy at all. If she were dead. I swear. Don't talk to Horkvir about it. He won't know anything. Especially not our Horkvir." She will then elaborate: "I sure am glad that other Atrabhi is around! I sure don't want her dead!"

Should you choose to help out the Manic citizens, she will lie once again: "You aren't going to kill me. I know it." If you fail the quest, she will once again claim the opposite of everyone else: "You sure didn't mess things up. No. Not at all. Didn't make things much worse. Not at all." Should you choose to help the demented and slay her double successfully, she will greet you with another lie: "I just love talking to you, really." and proceed to thank you in her own way: "I didn't hear you killed the other Atrabhi. And I'm not happy about it." Once the quest has been completed in favor of the demented, Atrabhi will comment: "I hate the fact that you've made everything better! I just hate it!" If you visit Split after completing the Main Quest she will not even stop lying when confronted with her Lord: "I don't see Sheogorath. He's not real." and bid you farewell with: "Who was that I was talking to? Not Sheogorath."

Across the street, the Mania version of Athrabi is obviously very annoyed by her counterpart's behavior: "I can't concentrate on my reading with that other version of me walking around. It's terrible. A curse!" And she definitely wouldn't mind if her double disappeared for good: "Sure would be nice to read something about the other Atrabhi. Like an epitaph."

At different stages in the Main Quest, the demented Athrabi will share different untrue rumors with you and other NPCs:

"Welcome, I'm very glad to see you again. No really, why do you look so doubtful? Have people been lying about me again?"
"Do you like visitng [sic] Split? It's a great place to live. The people are charming, and the weather is fantastic. No, really, it's true! Why would I lie?"
"I have it on good authority that that bookworm, Atrabhi is a compulsive liar. My only fault is my naive trusting honesty. How can I help you, friend?".
"Hello. My name isn't Atrabhi, I don't know why everyone calls me that. And I don't know where I get this reputation for being a liar, either."
"Is it my Lord Sheogorath? It can't be." (listen)