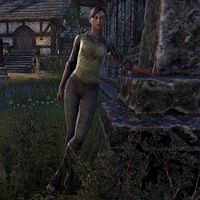 Ysanne Helena is a Breton who lives in Koeglin Village. She's east of the Sleepy Sailor Inn after the quest with the rest of the townfolk.

While Dame Dabienne is still imprisoned, Ysanne will agree with Constable Pascal's reasoning:

"I think the constable did the right thing. There's something shady about that knight. I've been watching her."

She can also be heard arguing with Mathon al-Rihad over these actions:

Mathon al-Rihad: "Ysanne, why are you here? I don't think gawking at that knight is such a good idea."
Ysanne Helena: "What do you mean, not a good idea? You expect me to show pity for someone who's working with slavers?"
Mathon al-Rihad: "You really believe that? She's a Knight of the Flame. There's no way she was working with the slavers."
Ysanne Helena: "Then why'd the constable have her locked up? You don't have an answer for that, do you?"
Mathon al-Rihad: "I don't understand the constable's reasoning, but I have enough sense to realize that something's not right here."

After Dame Dabienne has been freed and cleared of wrongdoing, Ysanne will still be suspicious of the knight.

"Maybe she wasn't working with the slavers, but there's still something shady about that woman. Mark my words."

Mathon will warn her about talking about the suspicions out loud:

Ysanne Helena: "I don't care if the constable was brainwashed by some cult. I still say there's something suspicious about that woman."
Mathon al-Rihad: "I wouldn't say it too loud if I were you. There's another set of stocks right there next to the constable."