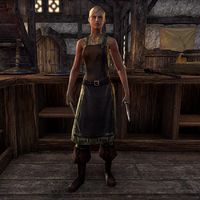 Sabyssa the Blacksmith is a Breton smith found in Koeglin Village. She, like many others in the village, has become a victim to Constable Pascal's paranoia.

When spoken to before False Accusations, she will state that the forge is closed due to the recent attack:

"The forge is closed. With the slaver attack and everything else going on, we have enough steel in the town. Try back another day and perhaps we can do business."

After you have proven the innocence of Captain Currod, Constable Pascal will turn his attention to Sabyssa and her apparent part in the Ember-Eye Slaver conspiracy. However, he no longer feels he can trust you and asks you to leave town. Instead, you head over to her store to warn her, Sabyssa will be behind the counter and sharpening some weapons.

When spoken with, she initially believes you are going to ask her to restart her forge on behalf of the constable.

"If Constable Pascal sent you here with orders to open the forge, you can just turn around and head right back out the door.
That man has no right to order me around, and I'm not about to issue weapons for his witch hunt."
I came with a warning—he's planning to arrest you.
"Arrest me? That beef-witted bastard! To think, I even cooked that man breakfast!
What in Oblivion's gotten into him? First he arrests a Knight of the Flame, and now me?"
You two were close?
"We were friends for years, and then one night … well, I guess you don't need the details.
For a month or two, I thought we had something. Then he just broke it off—wouldn't even let me in his house to talk.
He acted like I had betrayed him."
He mentioned something about his dreams.
"He did? He was having trouble sleeping ….
You know I saw one of those weird cult members leaving his house. The Supernal Dreamers.
You don't think that has anything to do with this?"

Who are the Supernal Dreamers?

"Don't know much about them really. I think they're dedicated to some Daedric Prince? They're crazy people.
Someone saw a group of them in the hills to the north, and then there was that one who visited the constable.
That's really all I know."'

I should investigate the constable's house.

"Good idea. Perhaps there's some indication of why Pascal's behaving this way.
He's just … not himself. I'll talk to some of the other townspeople. I bet some of them have noticed his behavior as well."

"Pascal's home isn't usually locked. You should be able to go right in."

Once you have searched the constable's home and found a Daedric Symbol on the bed, you can return to Sabyssa. While you were gone, she will have questioned other residents about Pascal's recent behavior.

"Turns out that almost everyone in town thinks Pascal has been acting strange—even the guards.
Did you find anything that explains his behavior?"
There was a Dremora. And this Daedric symbol on his bed.
"Oh my poor little Pascal. What a mess you've made ….
One thing's for sure—we need to put an end to all these wicked accusations he's been making."
And release Dame Dabienne from the stocks.
"Indeed. As I said, even the town guards knew something was amiss. I told them to be ready. I suppose Pascal will probably have to be restrained.
Oh, well, best thing for unpleasant work is just to get it over with. Let's go."

Speak to her before leaving her shop and she'll add:

"I can't tell you what a relief it is to learn that Pascal's mind is messed up.
I guess that sounds a little strange, doesn't it?
Regardless, I'm grateful for all your help."

When you exit the her store, Constable Pascal will now be in the stocks, Sabyssa will be standing nearby, sad that it came to this.

"Soon as you start talking sense, we'll let you out of there, honey.
My poor poor Pascal.
I thought he was acting like a churlish teenager, but it turns out he was just under the infuence [sic] of some evil curse."