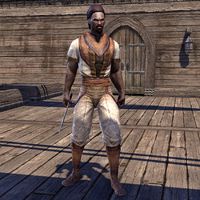 Captain Currod is a Redguard sailor and the captain of The Tava's Bounty, a ship currently docked in Koeglin Village.

Prior to starting the quest, he'll only say:

"The people of this village have no honor. When a ship comes into port with injured sailors, it is a sacred custom that those sailors be cared for.
To leave my men here bleeding on the deck is unforgiveable [sic]."

Constable Pascal will have reason to believe that the Captain is sheltering some of the remaining Ember-Eye Slavers below decks and asks you talk to Captain Currod to get his ship to set sail and leave. On the other hand, Currod claims that he isn't working with the slavers and he needs them cleared out and medical aid for his crew. He can be found standing on the deck of the Tava's Bounty.

He will angered by the poor treatment, when spoken with he will explain his side of the story and the means to prove his claims:

"In all my years sailing these seas, I have never received such ill treatment in a friendly port.
My men lie here bleeding on deck, and we are refused aid.
This man they call constable is a son of a dog … or did he change his mind?"
Constable Pascal says you're working with the slavers.
"I'd sooner eat sand than do business with these Dunmer swine!
I have explained this. Last night was dark. When I realized there was no beacon to mark the shore, I dropped anchor.
The slavers came in longboats. They caught us unawares."
But you managed to fight them off?
"It was a daring battle. The slavers outnumbered us ten-to-one, but we had planned for this. We lured them belowdecks and sealed the hatch.
Many men were lost, though. We here on deck are all that remain, and we need aid. Can you help us?"
Do you have anything to prove your claims?
"Yes, of course. I would gladly give my ledger over, but unfortunately, it is belowdecks.
This is why I have asked the constable to assist us in eliminating these Dunmer dogs, but he has refused.
I'm afraid we are at a stalemate in this respect."
Let me go down there. I'll get the ledger.
"You are brave, perhaps even a little foolhardy, but I like you.
Though I fear for your safety down there, I will not stand in your way. If you return with the ledger, I will be forever in your debt."
"The hatch is unbarred, and you may go belowdecks. The ledger is on my desk.
I'm uncertain how many slavers we trapped down there, but be prepared. They will not be happy to see you."

After you return with the ledger, he will be pleased to see you:

"Haha! My spirit soars to see you return in one piece. And you found the ledger, Ruptga bless you.
Please, take it to this constable and prove that we are friends and in need of assistance."

"Thank you for setting matters straight. My men are having their wounds treated even now.
We'll be back on the high seas soon—where we belong."