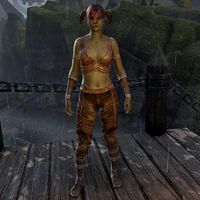 Roku is an Orc member of the Drublog Clan. She is the niece of Chieftain Agrakh, their leader at Dra'bul.

Enter the Chieftain's Longhouse and speak to her before Chieftain Agrakh:

"I know why you're here. You're looking for the reasons we went to Velyn Harbor, right?
I can't say anything. My uncle commands me to be silent. I'm sorry."

After speaking to Agrakh, she'll say:

"I've known the Green Lady for a long time, but she is not a Drublog, as my uncle constantly reminds me."

Once you have spoken to The Hound and heard the plan, Roku will appear behind you:

Roku : "She's gone. You're too late."
"I know you're not a Drublog. You're friends with the Green Lady, like me. But your trickery did not come fast enough. She's gone."
Gone? Where?
"She fell into the trap that Hound spoke of. Now my uncle, our clan's chief, waits for the Hound to take her away.
There may still be time to save her. Talk to my father, Shaman Glazulg."
Does he know how to free her?
"Yes. He made the trap, at the chief's request.
He's in the lower arena. I've wasted enough breath trying to convince him. Maybe he'll listen to someone else."
What was that shadow wolf creature?

"He calls himself "The Hound." I know little of who he is, or what his true purpose is.
I do know he craves the attention of the Green Lady. He would slaughter a whole village if only to ensure she remains unharmed."

Why are the Drublog doing this?

"We have lived alongside the Bosmer for generations. Some would say they look down upon us with disdain. And they would be right.
Chieftain Agrakh is wrong, but there are many who follow him. Many who would fight to see the Bosmer brought low."

After getting advice from her father, find Roku outside the arena entrance:

"Have you spoken to my father? We must hurry, with or without his blessing."
He didn't agree to help, but he gave me this.
"His handiwork, but these Daedric symbols aren't Mauloch's.
There's no time to study it, though. If he gave you this, it must be used to free the Green Lady."
I'm ready. Take me to the arena.
<Teleport into the arena>
Any idea what the symbols could be?

"I'm a warrior, not a shaman. I'd take too long trying to figure it out.
If my father didn't tell you, then maybe it's not important. Or he was ashamed."

Inside the arena if you speak to her, she'll say:

"Looks like those four totems hold the Green Lady captive. If my father told the truth, what you carry can disrupt them.
I'll protect you any way I can, but I won't raise a hand against my own clan."

While destroying the totems, you'll hear:

After destroying each totem, Roku will run to Gwaering's aid: