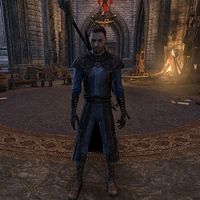 Mayor Aulus is the Imperial mayor of the settlement of Southpoint. His mind was twisted by Sheogorath and forced into turning Southpoint into a cesspool of madness.

Enter the cathedral and the following scene will play out:

Daraneth convulses, and none other than the mad god himself appears:

Sheogorath : "You heard me!
Sheogorath : "I've always wanted to meet a person within a person! Tell me, what's it like?
Mayor Aulus : "I'm … I'm so sorry, Sheogorath! I thought you'd abandoned me!
Sheogorath : "Aulie, I left you a tongue that drives people mad! But I suppose if you don't want my gift, I can take it from your mouth and give it to my new favorite mortal friend.
Mayor Aulus : "No! Think of all I've built here, the wonderful screams I've created, all in your name. Doesn't that make me your favorite?
Sheogorath : "Oh, very well. Sorry, my second favorite mortal friend! We had a good run, but it's time for your curtain call."

Re-enter the cathedral, and you'll see the following scene:

Mayor Aulus : "What do you mean, coming to kill me?"
Sheogorath : "It's a gift! A chance to shine, to prove you have some backbone that won't snap at the lightest touch! Really, Aulie, I'm quite fond of you. Mmm. Fondue. What was I saying?"
Mayor Aulus : "That you're fond of me. That you don't want to watch me die!"
Sheogorath : "Watch you die horribly, all alone, and laughing my head off when it happens? That doesn't sound like me. Does it? But I'm sure you can work the matter out for yourself."
Mayor Aulus : "Please, don't do this! Maybe we can work something out?"

"It's not fair! I never wanted this, any of this, and now I'm to die for it!
But you're reasonable, aren't you? We can talk about this, work something out?"
Sheogorath didn't give me much choice.
"You do have a choice! Not like me. Sheogorath listened to me, said he would take me down a golden path.
Nobody in Southpoint ever respected me, or gave me a chance to prove who I could truly be. What choice did I have but to make them all see who I really am?"
Are you saying you had to do all of this?
"My family ruled Southpoint for generations. But after we lost everything, where was my birthright then?
They wouldn't bow to me as they should, so now I've made them bow. It's the burden a true leader must bear. I shouldn't have to die for it!"

[Intimidate] If Sheogorath won't take you to Oblivion, I'll send you there myself.
"Wait! That's it, I'll go away with him, if he'll have me! Just let me try to convince him.
Besides, there's not much of Southpoint left. It's a bit used up, don't you think?"

If you don't convince him, you're dead.
I've made a deal with Sheogorath. [Mayor Aulus dies]/No, you've gone too far. [Mayor Aulus dies]
"No! I won't let you cast me aside, like everyone else. I'll make you see, just like all the others!"
I doubt that (Combat begins)

"I'll share Sheogorath's gift. Make you respect my power!"
"Kneel before me!"

But if you let him try to convince Sheogorath to take him to the Shivering Isles, the following scene will play:

Mayor Aulus : "Sheogorath, I've been thinking. Southpoint can't truly appreciate your gift. But if you brought me to the Shivering Isles, I'd fit right in!
Sheogorath : "You want to go where you're like all the others? Where you can be a shank of bacon in a house built of bacon shanks?
Mayor Aulus : "No! I mean, think of how I could use your gift in a place that truly understood me.
Sheogorath : "Well, I suppose you'd make a fine addition to the garden. Very well! The killing's off. Couldn't bring you to my home with more holes in you than when we first met. Just not proper.
Mayor Aulus : "Thank you, Sheogorath! Thank you so much. I can't wait to see my new home.
Sheogorath : "I'll send you ahead. I need a moment to speak with my second favorite mortal. Don't mind the grummites! They always smell that way."
Sheogorath will teleport Aulus away for good.

During combat, they mayor may summon a Bone Colossus.