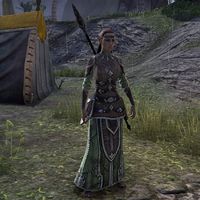 Daraneth is a powerful Bosmer mage found in the town of Southpoint. She is a member of the Mages Guild.

She is also a "skilled operator" of The Orrery in Elden Root. Once you have rescued her and have recovered Rajhin's Mantle and The Heart of Anumaril, she will be able to activate the Orerry. The Orrery's current caretaker, Meleras, will have you collect all three "missing elements" needed to activate the device. This is necessary so that the Orrery can divine Queen Ayrenn's capacity to become empress.

Once you finish speaking with Captain Elonthor, she'll coyly ask: "Did someone call my name?"

Speak to her and she'll say:

"Did Captain Elonthor send you to mock me? Did you come to tell me I don't know the work of a Daedric Prince when I see one?"
Daedric Prince? What Daedric Prince?
"Isn't it obvious? Madness swept through Southpoint like a plague, and so quickly! Only one Daedric Prince has such power."
Sheogorath
"No, it's ... Wait, yes, that's it exactly! The Daedric Prince of Madness himself, here in Southpoint.
It's all rather exciting, isn't it?"
You don't seem concerned about Southpoint
"I'm exceptionally concerned. It is my home, after all. But I'd rather show my concern by doing something about the problem.
The captain wanted to find his scouts, didn't he? We should get going!"
You want to come with me?
"Of course! You need someone who knows the town, and I need someone with whom to take a stroll in this lovely rain.
No use arguing, I've been getting my way since before you were born. Or do you want a sweet old woman to show more courage than you?"
"We should find those scouts before anything happens to them."

As you look for the scouts, she'll say:

Daraneth : "The streets are dangerous. We should check the homes. Be neighborly. See if those inside know where the scouts are."
In the first building you investigate, she'll remark:
Daraneth : "Hmm, no scout. And I do hope that smell came out of an animal."
In the second building, she'll say:
Daraneth : "No scouts here, just my neighbor. Although, this is certainly an … interesting arrangement."

After rescuing the Lieutenant:

Daraneth : "This mayor seems a charming fellow. We should decide what must be done about him."

"Soldiers turned into bears? People setting themselves on fire? And now a mad mayor, locked in a cathedral!
I know I should be horrified, but it all sounds so exciting."
What can we do about those scouts?
"Hmm? Oh, I suppose I can reverse the effects of the mayor's magic. After many years of honing my craft, this should be a simple matter.
But if we're hunting bears, I'll need you to be the bait."
You want me to be the bait?
"I'm an old woman! And such magic requires precision. Wrestling with bears impeded precision.
Slap them about their faces, throw sticks at them, call them harsh names. However you must, keep their attention while I do the complex part."
What can we do about the mayor?
"I have an old scroll tucked away in my basement laboratory. If we have it in hand, it won't matter how tightly he's locked that cathedral door.
But first we should rid Southpoint of its bear problem. Shall we?"
Let's go.

If spoken to during the stage to find the scouts:

"Bears leave rather distinctive tracks, don't they? I can't imagine they'd be hard to spot."

While fighting the bears:

After saving the scouts:

Daraneth : "That wasn't so difficult, was it? Now, let's head to my laboratory. We'll need that scroll to get into the cathedral."

"My house isn't far from here. We'll slip into my basement laboratory, grab the scroll, and use it to unlock the cathedral."

Try to enter the lab, and you'll get zapped. She'll yell:

Daraneth : "It's no use! Get out of there or the lightning will destroy you!"

"We won't make it inside my laboratory unless we can stop the lightning."
This storm isn't natural. How can we stop it?
"If someone conjured this storm, they'd do it from somewhere they could see everything in Southpoint.
There's an old Colovian tower nearby. It's the highest point in the town, aside from the cathedral."
Let's check the tower.
"We need to get to the highest point in town, that's probably where this storm is being conjured."

Daraneth : "Didn't think you had it in you! But the storm's clearing. We should head to my laboratory."

If you let him live, she'll instead say:

Daraneth : "Ha! I'm sorry, I just … I wasn't expecting that. We should head to my laboratory, now that the storm's clearing and all."

"Come, we should retrieve the scroll. Shouldn't we?
Yes … yes, we should."

Inside her laboratory, she'll say:

Daraneth : "Now where did she … ah, yes! It's on my desk. Yes, over there, do you see it?"
Pick up the scroll and she'll say:
Daraneth : "Let's head to the cathedral. We're the last people the mayor will expect!"

"You have the scroll. Now, we can enter the cathedral and give the mayor a bigger shock than the man in the tower!"

Enter the cathedral and the following scene will play out:

After the events with talking to the mayor:

Daraneth : "Good, you're finally coming out of it. We should … reintroduce ourselves."

"I don't remember how I came to be here in this cell. When I woke you were just standing there, foaming at the mouth.
Count yourself lucky that Sheogorath had no desire to treat you like a puppet. Unlike myself."
Why would Sheogorath inhabit your body?
"I was in Elden Root when I heard some of the strange rumors coming from Southpoint. When I returned here, I recognized the signs.
But when I arrived at my laboratory, Sheogorath was already there … dancing. Then I was dancing. After that, it all went dark."
What happened next?
"I saw and heard everything we did, but I couldn't affect a thing. It was a walking nightmare. My own mind, a prison.
I expected him to kill us both, but we're here aren't we? Best not to think of it. Applying logic to the Mad God is … unwise."
So what happened to Southpoint?
"'Mayor Aulus' happened. He's always blamed others for his own shortcomings, but I never realized he'd been touched by Sheogorath.
The only way the madness will end is with his death."

Do you really think he has to die?
"He has the power to remake Southpoint in his image, to the Mad God's delight. Where Mayor Aulus goes, Sheogorath won't be far behind.
I see no other way. Unless you convince Sheogorath to take him back to Oblivion, but arguing with the Mad God is folly."
We need to get out of here.

Or you can say:

Either way, she'll continue with:

"I don't see how. Those bars are thicker than sword blades. We aren't going anywhere.
It seems Sheogorath made a few changes to these catacombs. There were never any prison cells below the cathedral."
Can't you use your magic to open the door?
"I already tried. It seems Mayor Aulus bound my magic somehow. I'd say its maddening, but less so than having a Daedric Prince steer you around like a carriage.
When they come for us, we can try to fight our way out. If they come for us."

After speaking to Sheogorath, she'll remark:

Daraneth : "This is your chance to fix this mess. Go, deal with the "mayor." If Southpoint bores him, Sheogorath will leave."

"I'll be fine. There's still a chance to stop this.
And after all 'Mayor Aulus' has done, you shouldn't feel the need to hold back."

After completing the quest, you'll find her outside the cathedral:

"It seems Sheogorath held up his end of the deal. I felt his … absence, I should likely say. I was able to open a portal here without any difficulty.
I tried to tell Captain Elonthor what happened, but he wouldn't listen."
How did you know Aulus?
"In his youth, I took him as an apprentice. He was lazy, a bit reckless, and nearly set my laboratory afire on three occasions.
His childhood was quite difficult. But that's no excuse for his actions."
How was his childhood difficult?
"Long ago his bloodline ruled Southpoint. He was a child who thought the town would one day be his. But his parents died in a fire when he was young, and he lost everything.
I thought by taking him as a pupil I could teach him humility. I was wrong."
Your home was destroyed. Where will you go now?
"I'll return to Elden Root until Captain Elonthor sorts out the reconstruction.
You're welcome to visit, anytime you wish."

The Orrery of Elden RootEdit

Once the "missing elements" to activate the Orrery are gathered (including Daraneth), you will find her in the Orrery chamber standing on the landing overlooking the ancient device:

"Strange to see you, after Southpoint. Not bad, just … strange. But no matter.
I can hardly believe we're about to breathe some life into this old girl. And before you ask, yes, I'm speaking of the Orrery."
Are you ready to begin?
"Almost. You recovered the pieces I needed for the Orrery's activation, so it's only fair you're here to put them in place.
So I should be the one to ask … are you ready?"
I'm ready.
"Good! The first thing you'll need is to take up Rajhin's Mantle. 'A god's hands move the Orrery,' goes the translation.
But that's a load of boarslop. You simply need to be in three places at once. Rajhin's Mantle should allow for that."

"Oh, you'll be all right. That overly earnest fellow from the Mages Guild … Brelor, was it? He assured me you'd be safe if you wore it for no longer than ninety minutes.
Or was it nine? No matter, the ceremony will take five minutes. Maybe six."

All right. Give me Rajhin's Mante.

"Approach the pillars beyond the Orrery itself. You must activate each in turn while keeping one thought in mind: when you wear Rajhin's Mantle, you'll never be held in place.
From what I understand, it should do the rest."

After speaking to Daraneth, she'll start preparing the machine:

Prince Naemon : "So this pile of moss and rubble determines the next emperor."
King Camoran Aeradan : "The Orrery is ancient. Show some respect."
Queen Ayrenn : "It's magnificent."
Daraneth : "Nearly there, your majesties, Your Highness!"

If spoken to before commencing the ceremony, she'll say:

When the pillars have been activated:

"That's it! It's working. It's actually working!"
What next?
"Here, take hold of the Heart of Anumaril. Place it in the pillar next to our royal observers. That should do it!"
Do what, exactly?
"'Awaken the Orrery,' whatever that truly means. But have no fear. This contrivance allows me to manipulate its energies. This means I can keep Queen Ayrenn safe when she steps inside.
Now go, place the Heart of Anumaril! Let's see what all the fuss is about."

If spoken to before placing the heart:

"Leave me be. This is much more complicated than it looks."

After you've placed the heart and Naemon has cast a hold spell on everyone, she'll remind you:

Daraneth : "When you wear Rajhin's Mantle, you'll never be held in place!"

Once Nameon has been defeated, she'll say:

"Prince Naemon knew the dangers. What hubris, to do such a thing."

If you speak to her before Ayrenn, she'll only remark: "The queen … she's radiant!"

"I had my doubts about Queen Ayrenn. Not after today.
Travel well, my friend."