Time Bomb Mages are a class of hostile humanoid NPCs that attack using ranged abilities. They are usually equipped with a staff with glowing purple effects on the end. 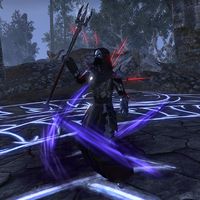 The enemy summons a purple orb from the sky that explodes when it hits the ground splitting into three projectiles dealing moderate magic damage. This skill then sends out magic AoEs across the floor called Void Bursts. This attack can be interrupted to set the enemy off balance or simply avoided.