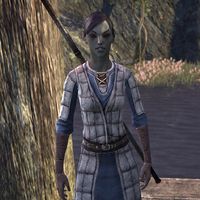 Guronii Alas is a Dunmer mage found initially at Mournhold. She can later be found at the academy of Shad Astula.

Flare
A basic ranged attack that does minor flame damage.
Heat Wave
The enemy releases fire along the ground in the direction it is facing. This attack does moderate flame damage to all players hit by it. This spell can be interrupted to set the enemy off balance or simply avoided.
Fire Runes
The enemy shoots two fireballs in the air which form two fire runes when they land. The runes do moderate flame damage over time to all enemies within the red circles and should be avoided. Players should be prepared to move as soon as the attack casts as one rune will always be cast on top of you.

"My father said I was the most amazing wizard he'd ever seen.
They'll probably make me class hortator."

Once you've started the quest, you can continue the conversation:

You don't look all that special to me.

"You're trying to goad me into a fight? Me?
That's hilarious! Do you know how many of my father's advisors I've sent to the healers after they dared to question me?"

At this point you can fight her or intimidate. If you do not have the Intimidating Presence perk, you'll be forced to fight her:

A fight? Sounds fun. Winner gets your invitation.

Defeat her in battle, and she'll say: Guronii Alas: "I yield! Take the invitation and leave me alone."

However, if you can use intimidation, you can say:

(Intimidate) And do you know how many brigands I killed on the road this morning?

"I killed something once, but it was an accident.
Wait, why are you bringing this up? Academy students just spar. They never fight to the death."

I only want your invitation. Your death would be an accident.

"You know what, why don't I just give you my invitation? No sense fighting over this silly thing.
I'll just have my family get me another one."

At the academy, she will speak as if her invitation was taken regardless of whether or not you take hers or not:

"My invitation? I don't have it with me. Someone took it, all right?
My family is dealing with it. Now go bother a Nord, why don't you?"