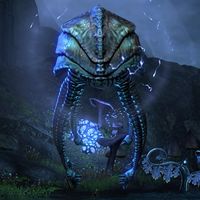 Grobull the Transmuted, with its shield up

Grobull the Transmuted is a netch that serves as the second boss in Darkshade Caverns II. Although at first it appears to be wounded, Grobull will rise up and attack once you approach.

As a boss type enemy, Grobull is immune to all forms of crowd control effects. This boss fight is separated into two distinct phases.

Grobull is immune to attack in this phase and summons other netches to help him. AOE abilities can help take down the large groups of small netches, while larger ones should be focused individually.

Reflection Ward
Grobull puts up a shield around him that makes him reflect all incoming damage back onto the player.
Teleport
Grobull chases after a random player, teleporting around to close the distance.
Emit Lightning
Once on top of the player, the boss releases a burst of lightning under itself as indicated by a red circle. This attack does very high shock damage and should be avoided at all costs.
Enervating Trap
The boss throws lightning balls that form pools of blue lightning on the ground. Standing in it will stun the player, and thus players should avoid it or break free from it.
Summon Netchling
The boss summons many netchlings to attack the party. Killing them will slowly deplete the boss's shield.

Once the shield is depleted, the boss falls to the ground. At this stage, it will be stunned for approximately 10-15 seconds.The boss is vulnerable in this stage only, thus players may want to save their damage dealing ultimate abilities specifically for this part of the fight.

Grobull the Transmuted is associated with two achievements.