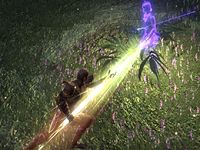 Focused Charge moves you to a distant enemy, dealing Magic Damage and interrupting any spells they are casting, stunning them if they are in the process of charging a spell. Explosive Charge adds an area of effect so that it can affect multiple enemies, or Toppling Charge causes the stun to occur even if they are not casting a spell, and applies Off Balance if they are.