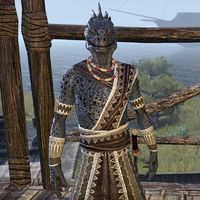 Chal-Maht is an Argonian who can be found outside Lilmoth Guild Hall in one of the look-outs. He wishes to undergo the bonding ritual with Kud-Nakal and is happy when you retrieve his frog totem and letter meant for her.

Chal-Maht explains the incongruity between the letter's contents and himself by explaining that he used to be female until he was changed by the Hist, as this is but one thing a Hist can alter in an Argonian. He can also be asked about the details of the Bonding Ritual itself.

During the quest he can be found looking over the sea.

"Your steps show determination, and your eyes curiosity. Tell me what you seek, beeko."
Did you lose this frog totem and poem?
"Ah, yes. I carved this many seasons ago. I hoped it would convince my beloved Kud-Nakal to join me for our tribe's next bonding ritual, but I lost the totem before it could be presented.
Of course, this was when I was still a female."
You used to be a female?

If you are not playing as an Argonian he will reply with the following.

"The Hist, in all its endless gifts, allows us to change many aspects of ourselves. Our gender is but one.
I highly recommend such a change, should you ever get the chance."

If you are playing as an Argonian he will instead respond with the following.

"Have you never undergone such a transformation, egg-sibling?
The Hist, in all its endless gifts, allows us to change many aspects of ourselves. Our gender is but one. I highly recommend such a change, should you ever get the chance."
So, because you're now male, you can't bond with Kud-Nakal?
"If we had spoken a week ago, it would have been so. But, as fate would have it, Kud-Nakal has recently undergone a change herself.
Thank you for bringing me this letter and totem. They should make fine gifts for my beloved."

After giving back Chal-Maht's totem and love letter, he can be asked more about Argonian bonding rituals.

"I will present these gifts to Kud-Nakal when the next bonding ritual is announced. I simply must tweak my poem, perhaps refine my carving, and all shall be ready."
Tell me more about Argonian bonding rituals.
"The ceremony bonds those who have chosen to lay an egg together.
Many dryskins compare it to a wedding. This is not entirely accurate, of course. While there is always respect between the bonded pair, romantic feelings are not strictly necessary."
So why didn't you bond with Kud-Nakal before?
"I had every intention to. Days I devoted to carving, to writing just the right words. I worked outside the village, not wanting Kud-Nakal to see my gift before it was finished.
And then a bog bloat invaded my camp."
So you ran away.
"Exactly so. I had no time to carve another totem before the ceremony, and so the opportunity was lost.
But, thanks to your kindness, I have been given yet another chance. I erect the spine of gratitude to you, beeko. As do my future hatchlings."
What does a bonding ceremony entail?
"Each tribe has their own traditions, but there are commonalities.
A tree-minder performs the ceremony before the Hist. The bonded pair are blessed with good health and vibrant fertility. And then commences the … bonding, as it were."
And how does one choose a partner?
"This varies. Sometimes the decision is based on an emotional connection. Other times, merely a physical attraction.
Some tribes even use such ceremonies to strengthen their political connections. Take the Bright-Throats, for example."
And yourself? Why do you want to bond with Kud-Nakal? 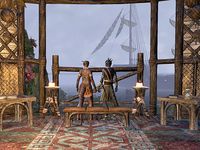 Chal-Maht and Kud-Nakal together.
"Ah, well. I simply believe we would have very becoming hatchlings. That is all."

If you go back to Chal-Maht at a later point, you will find that he succeeded in convincing Kud-Nakal of his intentions, as the two of them are now together watching the ships. When spoken to he will say:

"Ah, my deek-beeko! So good to see you again.
As you can see, I have wasted no time. Is not Kud-Nakal lovely? It is my hope that we shall have many beautiful hatchlings together. And that hope is only possible because of you!" (The questions from above are repeated.)