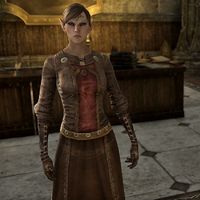 Canonreeve Malanie is the canonreeve of Mathiisen and formerly was a correspondent with Ayrenn. However, this has not stopped her from having suspected ties with the Veiled Heritance. She has a house in the town.

She can be overheard talking to Condalin, presumably about weapon shipments, after you leave Fistalle's House.

Malanie: "No more delays! Ready the cargo, today. I'm just waiting for the order to go though."
Condalin: "Fine! Fine. Ware, though. My men tell me of outsiders in town. Keep an eye out."

Entering the barracks, you find the canonreeve talking with Condalin and Ondendil, after being told Razum-dar was seen around the place.

You will then have to accuse her of treason.

"We're a bit busy here, traveler. If you could just—"
On behalf of the Queen, I'm here to arrest you for treason!
"Treason? You'd accuse me of treason? Here? Are you mad?"
I have proof you're part of the Veiled Heritance. You're under arrest, Malanie. Come quietly and—
"You little idiot. Ayrenn, that traitorous cow! She's the one who should be brought up on treason charges.
She's betrayed the Altmer—her own people! The Veiled Queen will soon be crowned and you can't stop us!"
I'll report you to—
"You'll report nothing! Odendil! Condalin! Now!"

Condalin will then knock you out and you will hear her give further commands as you fade out. 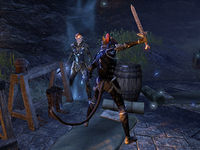 You wake up later in the barracks cell where Razum-dar will be waiting for you to wake up. He'll instruct you to defeat Condalin and meet him later. After you find the entrance to the Smuggler's Tunnel, the pair of you will corner Malanie deep in the tunnel.

Razum-dar: "Let's take her out quickly. Be done with this place."
Razum-dar: "You are under arrest, Canonreeve. For treason against the Queen."
Canonreeve Malanie: "The only queen I serve is the Veiled Queen!"
Razum-dar: "This is fine, traitor. We could use the exercise."

At this point, the canonreeve will have exchanged her dress for heavy armor and a lightning staff. Once she is dead, you can leave the tunnels.