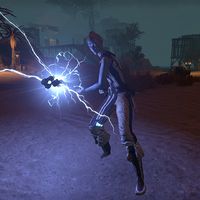 Storm Mages are a class of hostile NPCs who attack using shock magic abilities. They are easily identifiable as they carry a staff with lightning effects at the end.

A basic ranged attack that does minor shock damage.

This Elder Scrolls Online-related article is a stub. You can help by expanding it.
Retrieved from "https://en.uesp.net/w/index.php?title=Online:Storm_Mage&oldid=2365062"
Last edited on 18 March 2021, at 00:18