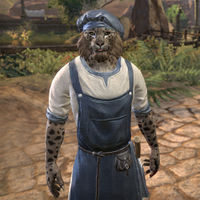 Asaldak is a premier Khajiit sweetmaker and chef who has previously served the Mane. Currently, he can be found at Merryvale Farms where Rigurt the Brash wishes to impress him with Nord culinary delights. However, Asaldak's past experiences have given him little proof that Nord food is in fact enjoyable.

If you speak to him before you deliver the flowers to Rigurt, you'll find him at the circular garden outside the Fragrant Moons Plantation, where he'll say:

After you have delivered the Honey Flowers to Rigurt, he will ask you to speak with Asaldak and convince him to try his Nord Sweetbread. Asaldak will give you the same greeting, but you can say:

The Nord ambassador, Rigurt, would like you to sample his sweetbread.
"Asaldak was once invited to Skyrim to try their so-called delicacies, but declined due to a disdain for cold weather. And bad food. And Nords in general.
Asaldak will try this Nord's sweetbread for a laugh. Tell him Asaldak will be there shortly."
I'll tell Rigurt that you'll meet him at Merryvale Farms.

You can then ask him further questions about career.

"This Nord had better be finished with his cooking by the time Asaldak arrives. Asaldak does not like to be kept waiting."
How did you become so famous?
"Because unlike you, I spent time mastering my craft instead of asking stupid questions.
Asaldak redefined food in Elsweyr. He was personal chef to the Mane. He has prepared food for many slobbering Nords, but has never seen one cook anything edible."
There's a first time for everything. You can try Rigurt's sweetbread at Merryvale Farms.

Once you have returned to Rigurt, Asaldak will walk up soon after, ready to try the bread.

Rigurt the Brash: "It's an honor to meet you, Asaldak. On behalf of Jorunn Skald-King, please enjoy Windhelm's famous sweetbread!"
<Asaldak looks at the loaf.>
Asaldak: "Did you bring the bread with you from Skyrim? It's hard as a rock."
Rigurt the Brash: "Harder than a rock! Rigurt made some improvisations to the original recipe."
Asaldak: "Hmm, it doesn't smell too wretched. Asaldak will attempt to take a bite without breaking a tooth."
<Asaldak takes a bite of the sweetbread.>
Rigurt the Brash: "What do you think? Impressive? Delicious? Ferocious?"
Asaldak: "Atrocious! Why is it filled with flowers? Why are the flowers covered in dirt? Why are there insects in the dirt?"
Asaldak: "How did you make something so terrible?"
<Asaldak staggers away clutching his stomach.>