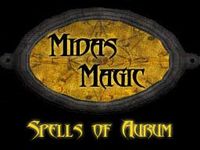 Midas Magic - Spells of Aurum is a mod for Oblivion created by XilverBulet. It adds over 290 new and unique spells, including beam, sprays, AOEs, projectile attacks, and over 25 new summons. Turn bodies to gold, summon your own magic carpet or Dwemer transformer, or protect yourself with a ring of fire.

Midas Aurumius, a once prominent member of the Arcane University, was on the verge of a magical breakthrough when personal differences with Arch Mage Traven got him expelled from the University. Midas, who was not without political influence, was able to pull strings and commision the construction of his shop just outside the inner gates of the Arcane University to spite Traven and continue his research. Once completed, Midas published his research and made use of his facilities available to the general public; giving access to spells that in many ways surpass those that are only available to Mages Guild members. But, obtaining Midas' Magic is not without its challenges. Many of the ingredients for the process are rare or difficult to obtain. Some may even require slaying legendary monsters or questing into new worlds to obtain.

Midas Magic has a unique spell creation system. The spells are not purchased like normal spells, but are instead created by an alchemical process in Midas' shop which is located to the right as you enter the Arcane University courtyard. The steps for creating a spell are as follows:

The following is a list of in-game books that can be found in Midas Magic. Most of these contain at least one spell recipe.

Where Tiger? Initiation: Hunt down a snipe and take one of its feathers