Make it to the CastleEdit

Whenever you're ready, speak to Savlian Matius to begin the battle. Follow him out of the chapel and wipe out the Daedra. If any other soldiers survived the previous quest, they will continue to accompany Savlian and help with the attack. Savlian is essential, so he cannot be killed. However, the rest of your allies are mortal and unleveled. Keeping them alive - although optional - is a notorious challenge at high levels. Eventually, Savlian and his men will reach the path that leads to the castle only to find that the gate has been sealed. He sends you to find Berich Inian, who has the key to the guardhouse.

When you return to the chapel, you will meet reinforcements: two Imperial Legion Soldiers and one Imperial Legion Archer tell you that they saw the smoke from the Gold Road. Ask them to follow you, then talk to Berich. He will lead you into the Chapel Undercroft, where you will encounter several Daedra. At the far end of the Chapel Undercroft is a door leading back outside. Berich will lead you through the city streets, fighting Daedra as you go, to a hidden tunnel that leads to the gatehouse. Once there, Berich will open a locked trapdoor with his key and depart, leaving you and your Imperial Legion soldiers to it. If Berich gets killed at any point on your way toward the gatehouse, you will have to loot the key to the trapdoor from his corpse and open the trapdoor yourself. 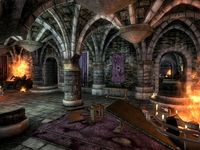 Inside the Great Hall

Once the courtyard is clear, Savlian will run into the castle. Approach him and he'll tell you to go find the Count of Kvatch while he takes care of the main hall. He and his soldiers will remain at the entrance to the throne room. Only the Imperial Legionnaires will follow you as far as the entrance to the next area. Be sure to grab A Dance in Fire, v4 - an Acrobatics skill book - from a table in the Great Hall immediately to your right.

Fight your way through the Great Hall towards the north end, where there is a passage leading to the Count's bedroom. Count Ormellius Goldwine is dead in his chambers; there is no possible way to save him. When you find the count, a quest update will tell you to at least take his Colovian Signet Ring back to Savlian. Back in the main hall, inform Savlian of the Count's death to complete the quest. If you give him the ring, he'll give you his Kvatch Cuirass in return. The leveled light armor cuirass fortifies Strength and Endurance by two to eight points.