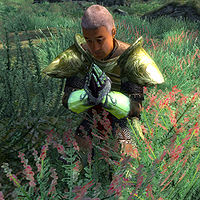 Melus Petilius is an Imperial champion. His wife, Vena Petilius, died and now he spends time every day at her grave (a short way east of his house). While you are on the associated quest, the townspeople in Brindle Home will tell you his sad story: he used to be a paladin, rushing off to help anyone in need, defeating a horde of goblins that attacked town and even single-handedly cleansing a nest of minotaurs. But one time while he was off fighting, Vena died suddenly of fever. He has never forgiven himself for not being with her when she died, and as a result has sworn an oath to never raise a weapon again. Unfortunately, his good deeds and honorable nature have offended one of the daedric princes, who is determined that he should give in to temptation.

Melus sleeps from 8pm to 4am and heads off to visit his wife's grave at 10am each day. Once there he will mourn for five hours before heading back home. Outside those times he paces disconsolately around his cabin.

He wears an almost complete set of possibly enchanted leveled light armor, minus the helm. He carries around a humble outfit consisting of belted braies, a belted vest and braided leather sandals, but he will only equip it if his armor breaks. He also possesses a small amount of gold. Usually he carries no weapon, but during his related quest the player must entice him into picking up the Cursed Mace.