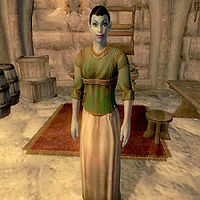 Melisi Daren in her workshop

Melisi Daren is a Dark Elf hunter who works as the taxidermist in Battlehorn Castle after you purchase the Battlehorn Trophy Hall upgrade. She will create stuffed replicas of the creatures you kill upon being presented with the right ingredients.

Amusingly, she was recommended by Baenlin, a Wood Elf who figures into a Dark Brotherhood quest involving a mounted head.

Melisi is the one character in the castle who gets a full eight hours of rest, sleeping in the bed in her office between 10pm and 6am. She eats once a day, taking her meal in the east wing dining hall between 8pm and 11pm. For the rest of the day she either reads a book, practices her potion-making, or paces her room. At 10am each day when she is given the necessary items (9am for the bear), Melisi finishes making the replica on which she has been working and heads off to place it in the great hall before returning to her normal routine.

Melisi is the only Dunmer that refers to the player as "sera" (or "muthsera" if your character is female) when actively speaking to her, though most will do so if the player is just passing by. Also, she's one of the few characters in the game that go barefoot.