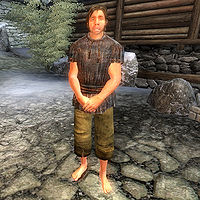 Jorck the Outcast is a Nord beggar living in Bruma. His bedroll and food bag can be found behind Arnora's House. You may contract the rust chancre disease should you fight him.

He starts every day by strolling around the front of the Great Chapel of Talos from 6am to 10am, begging for food and money from any townsfolk passing by. After he has tried his luck there, he moves to the east gate of the city and continues to beg there for four hours. At 2pm he will move again, this time stationing himself in front of Nord Winds. After a long day of begging, he will return to his bedroll to eat from his bag and have a two-hour-long dinner. At 8pm he will roam around his bedroll until he goes to bed at 10pm.

His only possessions are a sack cloth shirt along with sack cloth pants. He may also be carrying any amount of gold that he earned in the day. By being a beggar he doesn't have access to weapons or powerful spells, using instead his fists in combat.

He and the other beggars around Cyrodiil can give you information about how to join the Thieves Guild and also play a part in the Speechcraft Training quest. For a small fee, he will also prove useful during the quest Spies, as he will provide information about Jearl and her new resident.