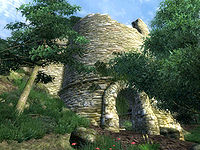 Fort Bulwark is a medium-sized fort northeast of Leyawiin containing conjurers (plugin-specific). It contains three zones, all of which are named Fort Bulwark. 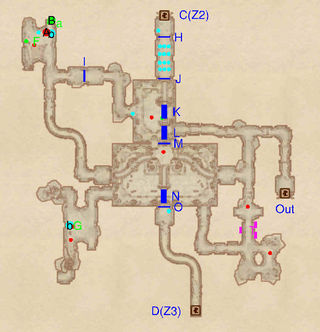 At the first junction, turn left and keep heading straight. Battle past two enemies and a series of darts traps (T) until you reach the lower level of the central room. Be careful as you may be detected by the enemy on the bridge above. Head west into a room with evidence of excavation. Along with rubble and pickaxes, you'll find two conjurers, a bedroll (b), a minor loot chest and a bookshelf with an Apprentice Alembic, a Novice Mortar & Pestle, a Novice Retort and a Redwort Flower (G).

Track back to the corridor with the darts traps and take the door on your left: this gives you access to the higher level of the central room, which is guarded by an enemy. Move along the bridges westward, until you arrive in a room full of broken and overturned furniture. There are two conjurers (one boss-level at A) guarding a boss chest (B), a bedroll (b) and a collection of items. At F you will find a full set of iron armor, plus a spare pair of gauntlets. On top of the boss chest, at a, are a novice alembic and calcinator as well as a Conjurer's Note with useful instructions.

The lever in this room opens the gate at I. Proceed along the corridor until you arrive at a balcony overlooking a small room with two drawbridges. The lever here lowers the bridges (K and L) and opens gates M and J. Jump down into the room, fighting an enemy and looting the nearby chest. Make your way back round and cross the bridges. The gate at H is opened by stepping on the correct pressure plates. The order is: left, middle, right, left.

When returning from the third zone through door D, use the nearby lever to open the gate at O and lower the drawbridge in front (N). 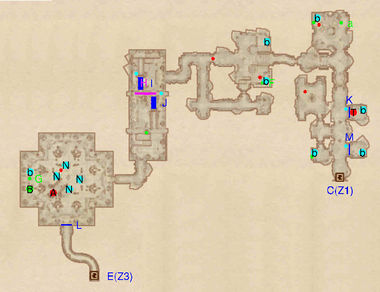 The corridor you emerge into from door C is the fort's dungeon. There are two cells on your right, both with gates (K and M) opened by switches in front of them. In the second you will find Sir Thedret (T). On the left is the torture chamber, a grisly affair staffed by a conjurer. Head to the southernmost room for a bedroll (b) and a minor loot chest.

Return to the corridor and head north; in a room full of broken furniture you will find a conjurer, a bedroll (b), a minor loot chest and collection of items at a. These include food, a flawless topaz, a ruby and a second Conjurer's Note. In the next room are two more conjurers and bedrolls and a minor loot chest. Some alchemical equipment and a diamond in a bowl are also found at F. In the following room, use the levers to activate the drawbridges at I and J, while avoiding the darts traps on the ceiling at H.

The final room is dominated by a raised statue of Julianos, with four smaller statues below it. Guarding them are two conjurers (including a boss-level one at A). There are also a boss chest (B) and a series of alchemical equipment and ingredients at G. To open the gate at L, use the relevant levers to turn all the statues (N) towards the plate on the floor.

There are no enemies in this zone; your only opponent is a puzzle involving the belongings of a crusader named Rodgar. Inside chest A you will find one of these items at a time. Step onto the nearby pressure plate and one of the eight chests around the room (a, b, c, d, e, f, g, h) will light up with an image of the correct item to deposit into them. From a to h, the correct order is Stone, Helm, Goblet, Sword, Book, Hammer, Skull, Gem.

Once all the items are in the correct chest, the stone door at H will open. Proceed to the next room and loot the Shield of the Crusader from the altar at Q. Alongside it are a number of potions and scrolls. Pass through door F or G and head back to the first zone through door D.