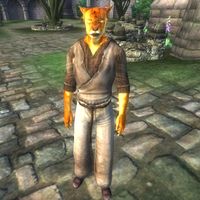 Dro'shanji is a Khajiit agent living in Bravil where he earns a living as a gardener at Castle Bravil. He is a member of the Thieves Guild and offers advanced training in Security.

He is quite proud of the "grand gardens green" surrounding the castle courtyard and spends most of his time maintaining it. He lives across the street from the Fighters Guild and sleeps in his house there every night between midnight and 6am. After waking up, he always spends the first two hours wandering around on the ground floor. At 8am, on all normal weekdays (Morndas to Fredas), he crosses the bridge to the castle and nurses his beloved garden until 6pm, only interrupted at noon by a two-hour dinner break at the Silverhome on the Water. He then spends the evening at home, eating dinner between 8pm and 10pm, and always goes to bed at midnight.

On Loredas and Sundas, he takes a well-deserved break from his gardening duties, and instead strolls around in the area between A Warlock's Luck and the southeastern bridge while chatting with Reenum and the other townsfolk passing by. He will be in this area from when he leaves his house at 8am until 6pm, only interrupted by his usual lunch break at noon. At 6pm, he crosses the southern bridge and enters The Lonely Suitor Lodge and hangs out there until he goes home at 10pm. After two hours of wandering in the house, he finally falls asleep at midnight. For the entire duration of the week, he will offer services at all times, except when he is sleeping, eating, or partying at the Lonely Suitor Lodge.

He wears typical lower-class attire, a coarse linen shirt, a pair of light brown linens, and rough leather shoes. He carries around his key and a considerable amount of gold. Dro'shanji is capable of casting either Chameleon, Invisibility, or Silence to aid him in combat.

When you meet him for the first time, you will get a typical Khajiit greeting and an introduction to his line of work: "Dro'shanji greets you. His work is the castle grounds, grand gardens green. Dro'shanji also is Advanced Trainer in Security." When asked about Bravil, he reveals that he shares the common viewpoint about the swampy town: "Bravil is perhaps not so nice. But Bravil Castle, and castle gardens, they are jewels, are they not?"

As an advanced trainer, Dro'shanji can provide you with the necessary preference to receive master training in Security. Once your skill level reaches 70, speak to him and choose the 'training' option, which will trigger the quest and the following words about J'baana: "If more knowledge is what you seek, you must consult J'Baana. He is wise in the way of locks. He is the guest of the Legion, at the Legion Headquarters in Cyrodiil. Seek him there."