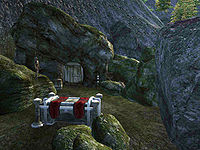 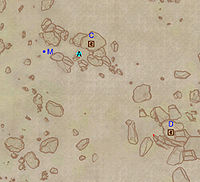 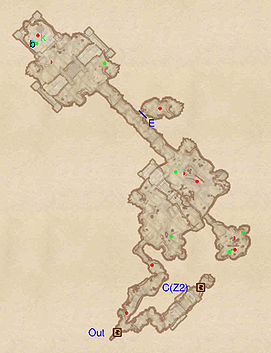 You start in this zone at an intersection. To the right is a passage to the door (C) leading to the next zone; to the left is the main part of the current zone where you will find all the enemies, treasure and the key to the second zone.

In the first room you enter is a staircase that leads downwards to another room which contains two chests, a dead Skeleton and one or two occupants. Halfway through the passage that links the two main chambers is a locked prison cell (E) occupied by an Undead. In the second room you can find a small living area which consists of assorted furniture, a bed (b) and a Fine Chest (k) holding the key to Dark Fissure Tunnels. 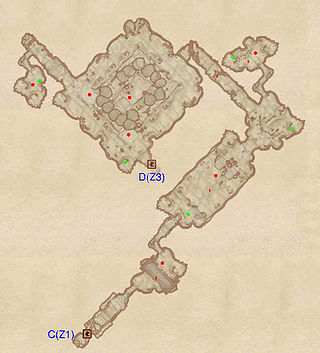 This zone, unlike the other two, is fairly straightforward. Simply make your way through the chambers and passages until you reach the entrance to the third level (D). There are two small rooms that are located slightly off course but are easily identifiable.

To reach the chest in the first (long rectangular-shaped) room, you will need to jump up onto a ledge which is above the entrance you came in from. 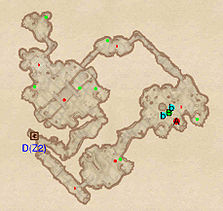 Like the first zone, this final one has an intersection right at the beginning. Head left and you will end up in a large chamber with a chasm running through the middle. Be sure to loot the half-buried chest on the far right and to explore the far northern side of the chamber before jumping down. Move clockwise until you arrive in a large room which holds the boss chest (B) and the boss-level Necromancer (A). Nearby are also two stone Sacrificial Altars (b), which can be used as beds. Keep proceeding in the loop and you will eventually end up near door D.