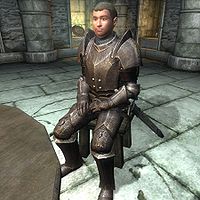 Captain Gepard Montrose is a Breton guard, and head of the Imperial Prison Guard. He can be found in the Imperial City Prisons; his office is in the room where Emperor Uriel Septim VII died. You can visit his office during the quest Scheduled for Execution and see what (little) progress the guards are making on investigating the assassination.

For someone tasked with an investigation, he is not very active, and just sits in his chair the entire time in front of his desk, apparently studying the sandals and the robe placed upon it.

Unlike his fellow Captains, he wears a near complete set of normal Legion armor, consisting of a cuirass, greaves, boots and gauntlets. His preferred weapon is a silver longsword. He carries the prison key, the key to Valen Dreth's cell and a small amount of gold.

Montrose seems to have been promoted only recently. Two guards can be overheard discussing their boring schedule and one will comment: "That's exactly what I'm saying! But will the Captain listen? Noooo... 'We must have a presence!' 'The prison must remain secure!'" and "Yeah, well, I guess you can't blame Captain Montrose too much. This is his big career move, after all. Got to impress that lot upstairs."