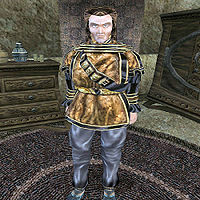 Yngling Half-Troll is a Nord noble and Councilman for House Hlaalu. He has a prized collection of game rats, which he values greatly. You'll need to either buy his support or kill him in order to become Hlaalu Hortator. Yngling has also apparently been stealing money from the Tribunal Temple to fund his own endeavors: but, although corrupt to the core, he is not a member of the Camonna Tong, as they do not accept non-Dunmer into their ranks, and thus his support can be independently purchased.