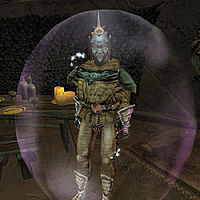 A proud and haughty warrior, his manner can seem aloof and unfriendly to those who have only newly met him: indeed, he is unlikely to even give so much as the time of day to anyone who has not first shown proper courtesy to other members of his tribe, from the lowest all the way up to Gulakhan Zabamund. However, once one gets past this initial reserve, he is a true friend: the only Ashlander Ashkhan willing to accept outsiders as Clanfriend and later Hearthfriend, offering the full range of Urshilaku hospitality, and open-minded enough to be willing to accept an outlander - even a non-Dunmer - as Nerevarine, after the Lost Prophecies have been discovered.

These are serious words, %PCName, words of life and death. I see honor and merit in you, and am proud to name you Clanfriend. But take care what you say and do in the name of the Nerevarine. Now go question Nibani Maesa, and learn all she can tell you."

Nearby lies Kogoruhn, the ancient halls of the forgotten house, House Dagoth. In recent time, creatures of the blight have come to dwell there. I myself went there, with some brave hunters, and came back again, but it was a bad place, and I am not ashamed to say I was afraid, for myself and my men. If you would have from me the secret of the Third Trial, the 'caverns dark' where Azura's eye sees, you will first bring to me three tokens from dark Kogoruhn.

The first token is corprus weepings from a corprus beast, to show that you are proof against the disease's corruption. The second token is a cup with the mark of House Dagoth, for I have myself seen such cups there, and will know you have seen with your eyes what I have seen with mine. The third token is the Shadow Shield, which lies on the Tomb of Dagoth Morin, in the lava tunnels deep beneath ruined Kogoruhn. Bring these things to me, and then I will tell you the secret of the Third Test."

[Malipu-Ataman's Belt has been added to your inventory.] This riddle is Wisdom's Test. Take counsel of the wisdom of the tribes, and you shall find the way. Seek the Cavern of the Incarnate. Gain the moon and star, and bring it to Nibani Maesa. Take with you my blessing, and the blessing of our tribe, Malipu-Ataman's Belt."